The announcement yesterday that Intel was acquiring Wind River Systems (ticker: WIND) for approximately $884 million caught the industry by surprise. For us at Military Embedded Systems, it was literally a ‘Stop the presses!’ moment as we pulled back one story in order to cover this significant breaking news.

First, a disclaimer. I’m a huge fan of Intel, and I frequently write glowing things about the company because I’m convinced they’re the primary technology driver for the embedded industries we follow here. As a result, they invite me to their annual “Intel Developer’s Forum” and give me front-row seating1. We’re buds, so to speak. As for Wind River Systems (WRS), I tell the story of getting a frantic call from founder Jerry Fiddler asking for a replacement copy of his own PowerPoint presentation because of a laptop crash. I sent it to him immediately. So yeah, I like Wind River Systems, too. Sounds like one big happy relationship, doesn’t it?

Except for this nagging fact: I can’t figure out the reason for this acquisition. Intel offered $11.50 a share for WRS, which was a whopping 43 percent increase over the company’s previous day’s price. Today, JP Morgan downgraded WRS, causing speculation that there may be other buyers willing to pay more, or – as other analysts speculate – maybe Intel is paying too much. But I’m not an investment journalist, and this isn’t my area of expertise. Go call your broker for financial advice.

However, I am a technology expert. I know Intel’s dying to get into the 15 billion unit Mobile Internet Devices (MIDs) forecast, I just don’t see how paying nearly a billion dollars for Wind River is good for either company. What’s clear, though, is that as the desktop and server markets saturate, Intel needs other sources of revenue. The good news is: The company has market opportunities aplenty, and the technology cojones to succeed. When Transmeta made low power (instead of clock speed) the key CPU differentiator, Intel wiped the floor with them with the Centrino and Pentium M. Ditto with multicore dabbled in by MIPS, Freescale, and ARM, giving us Core 2 Duo and Quad, Core i7, and now SoC devices for digital TV and other high-volume consumer markets. Well, all but one really important market: cell phones, and increasingly smart phones. Intel’s foray into smart phones such as Samsung’s i600 with the Xscale ARM derivative ended when Marvell bought the line for $600 million in 2006 (according to Jordan Robertson, AP technology writer). Intel’s awesome new Atom CPU, the most frugal of which sips a mere 0.65 W, is a definite ARM contender in the 164 million unit smart phone market (per Forward Concepts; Will Strauss). But Intel’s been married to Microsoft for years – though Windows CE/Windows Smart Phone/Mobile isn’t as sexy as RIM’s BlackBerry or Apple’s iPhone (running OS X, likely on a Samsung-based ARM ASSP).

So what does Wind River bring to the smart phone market? I suppose Wind River’s Linux distro is a possibility, although I’d speculate why not buy MontaVista’s or TimeSys’ offerings for much less? Or, if they want a light OS for small devices, why not Express Logic’s ThreadX, QNX, or even Mentor’s Nucleus? Perhaps Intel wants to try Apple’s H/W + S/W approach – but Apple makes the whole phone, not the ICs and software combined.

For non-desktop/server markets, that still leaves telecom (Intel sold off their Communications Alliance/PICMG boards to RadiSys, and their Dialogic and Ziatech acquisitions), medical, automotive, “other consumer embedded,” plus Aerospace and Defense (A&D). I doubt Intel’s interested in Wind River’s A&D dominance, though darn near all new Intel embedded devices go on their seven-year life-cycle roadmap, which appeals to the military. Let’s put automotive aside for the moment, although custom, long-annuity MCUs and CPUs with bolt-on software could be Intel’s plan in automotive. No, I really think that Intel sees the “other consumer embedded” as the target. Those mobile Internet devices basically are everything that’s attached to what Intel calls “The 4th Stage of the Internet”: appliances, kiosks, handheld doodads yet to be designed, telemedicine, games, and so on. Let ARM have the cell phone market (for now), position and posture for the global auto industry’s resurgence, keep A&D happy, but provide custom software for the huge-and-growing “other” category. At last year’s IDF, Intel forecasted “15B Devices by 2015” (see figure). By adding system value through software IP, Intel can command higher prices for its ICs, or still win designs when the IC choice is a price-sensitive commodity. This latter strategy is the only thing that makes sense to me at this moment.

Still, Intel’s smarter than I am. You can bet that for $884 million they did lots of due diligence discovery. I recall an industry social event where I asked Intel’s then-CEO (now chairman) Craig Barrett about the 3GIO fabric replacing the PCI bus. He smiled and politely said: “No, you want to watch PCI Express.” At the time, PCIe was a clearly inferior underdog. But once Intel threw its weight behind it, the rest is history. With Wind River, we’ll have to wait and see if the company puts the wind in Intel’s mobile Internet device sails, or blows them off course.

1 To the extent that I received a cameo appearance in the TV show “Orange County Choppers” when Intel was presented the Intel Chopper in 2007. 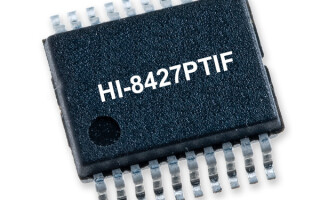