There's a lot of energy being put into battery research, and the defense world is benefiting big-time from civilian research.

While Moore’s Law evolved 1000x performance from the Pentium 4 to today’s Core i7 in only a few years, batteries have changed little until now. New funding on batteries is finally trickle-charging research a few million dollars at a time to universities, federal labs, and COTS start-ups. As well, many established battery companies are spending their own capital developing better batteries for the digital smartphone and tablet markets, or for automobile applications such as GM’s Volt, Nissan’s Leaf, and other vehicle platforms. Money is being spent in both primary cells (disposable) and secondary rechargeable batteries. The DoD is also funding battery research directly and through DARPA.

For vehicles, the U.S. Advanced Battery Consortium (USABC) has handed out funding the past several years such as the $1.41 million to Quallion LLC for their patented Matrix “series plus parallel cell” battery. USABC, funded by GM, Chrysler, Ford and the DOE, is keen on the Quallion’s cell that’s redundant and dissipates recharging heat very well. For defense, Matrix’s redundancy means battle resilience and the ability to operate in extreme heat. USABC also handed out $15.6 million in March to another five companies with promising battery concepts, including Maxwell Technologies for their double energy density 30 W-h/kg advanced ultracapacitor, which isn’t a battery at all but a big capacitor.

The DoD has also requested money for batteries, from zip in FY10 to $800,000 in FY11 for the “Fuel Cell Hybrid Battery Manufacturing for Defense Operations.” Traditional lead-acid car batteries work fine in your Jeep Liberty until you do some serious off-road wheelin’ and the acid leaks or the lead plates break. Worse, at 0 °C, the battery has lost 20 percent of its capacity; at -40 °C, it’s lost 70 percent (source: Concorde; www.marine-electronics.net). A combined fuel cell/primary battery might offer the best of both worlds in high shock/vibration military vehicles. Congressman John Yarmuth of Kentucky agrees, and has requested for his state $5 million in DoD funding for advanced battery R&D for “novel battery and ultracapacitor materials discoveries” for military transportation. Improved energy density vehicle batteries would not only start the engine, they would help drive power-hungry electronics gear and supplement or replace onboard generators.

International Battery of Pennsylvania just won the first $730,441 of an estimated $6.7 million from the U.S. Army’s TARDEC to develop a hybrid energy storage solution for tanks and Stryker vehicles. The Silent Watch program wants lightweight, rugged, no-heat batteries using lithium iron phosphate cells for energy and ultracapacitors for 50-100 Amps in a car-battery footprint.

Meanwhile, the DoD started funding Battery Network (BATTNET) at $1.0 million per year in FY10 with Short Term Proposals at $100K per year for “sustained availability, quality, and affordability of batteries.” The focus here is for digital electronics. The worry: exotic materials like Lithium that might come from unfriendly offshore sources. Elsewhere on the digital side, Contour Energy has invested in Fluorinated Carbon nanotube cathode materials to dramatically increase energy density, temperature range, charge cycles, and voltage. The Carbon nanotube design provides substantially more cathode surface area, a key measure of chemical energy production.

By introducing Fluorine atoms to the Carbon reaction in a typical military BA-5x90/U soldier’s battery, double the volumetric energy or half the weight is possible. This means longer runtimes for digital gear within the same battery envelope. For now, Contour Energy is selling COTS button batteries of the CF/CRxxx type and gearing up for Li/CFx thin film, cell, and prismatic batteries.

Finally, there’s one last type of novel battery attracting investment. Betavoltaic batteries work much like a photovoltaic solar cell: using high-energy particles to excite a current flow. Start-up City Labs has taken garden-variety Tritium – the mildly radioactive Hydrogen isotope used in luminescent watches – to blast electrons at a PN junction1. Electron-hole pairs are created, causing a nanocurrent to flow. They’ve achieved 25 to 50 nW/cm2, which can be scaled three-dimensionally to about 50 microW/cm3. Not enough to power a radio, but enough to power an FPGA backup SRAM or keep a crypto key alive for 20 years.

I’ve mentioned at least 10 different battery companies and nearly as many novel battery technologies that emerged in only the past couple of years. As funding flows from federal, state, and private sources, existing public companies are also boosting their battery R&D efforts. Whether for cars or fire control systems, lightweight, high-energy batteries will power the warfighter’s future.

1 Refer to my interview with City Labs at http://bit.ly/betavoltaic. 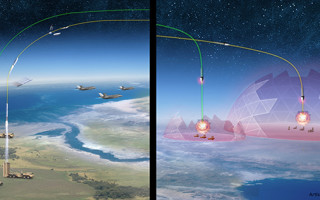