As hypersonic missiles, stealthy drones, and myriad other threats continue to emerge, ships are adapting by bringing more sophisticated laser and radar technologies aboard.

The U.S. Navy is turning to a wide range of directed-energy weapons (DEWs) – high-­powered lasers – and more sophisticated radar systems to expand both its short- and long-range defense capabilities.

Laser weapons, no longer science fiction, are changing the way the U.S. military counters drones, missiles, and other threats. Earlier this year, Lockheed Martin and the U.S. Navy moved a step closer to integrating a laser weapon system onto an Arleigh Burke destroyer by successfully conducting a critical design review for the High-Energy Laser with Integrated Optical Dazzler and Surveillance (HELIOS) system.

HELIOS is a 60 kw-class high-energy laser weapon system that will initially be installed on an Arleigh Burke Class DDG (guided missile destroyer) Flight IIA and integrated with the Aegis Combat System. “This allows the system to pass tracks back and forth between Aegis and the laser subsystem that supports sailors in providing an overall tactical picture,” explains Joe Ottaviano, business development director, Lockheed Martin Rotary and Mission Systems (Washington, D.C.).

HELIOS is 100% structurally integrated directly into the ship’s electrical system and doesn’t require a separate energy magazine. “Due to the efficiency of the laser, the ship has the power bandwidth to support it,” Ottaviano says.

Beyond this, the system features a long-range ISR [intelligence, surveillance, and reconnaissance] capability. “HELIOS high-powered optical sensors will be part of an integrated weapon system designed to provide decision makers with maximum access to information,” says Ottaviano. “And its data will be available on the Lockheed Martin-led Aegis Combat System.”

HELIOS is designed for warfighting within a maritime environment under demanding operational conditions, so it relies, Ottaviano says, on “commonality between HELIOS subsystem components and existing shipboard equipment (cabinets, dry air, power distribution, cooling) to reduce training and logistics impacts.”

How can HELIOS change Navy surface fleet-operations? Ottaviano answers: “It provides a game-changing tactically integrated direct energy capability and optical intelligence, surveillance, and reconnaissance data to warfighters at sea that will lead to the development of new tactics, training, and procedures as well as new concepts of operation.”

The most surprising thing about HELIOS, Ottaviano adds, is that it “operates at the speed of light and with its deep magazine complements existing weapon systems to provide additional, integrated capability against surface and airborne threats.”

In March 2020, amphibious dock ship USS Portland successfully disabled UAS via a solid-state laser developed by Northrop Grumman. This was the first system-level use of a high-energy class solid-state laser by a U.S. Navy Pacific Fleet ship. (Figure 1.) 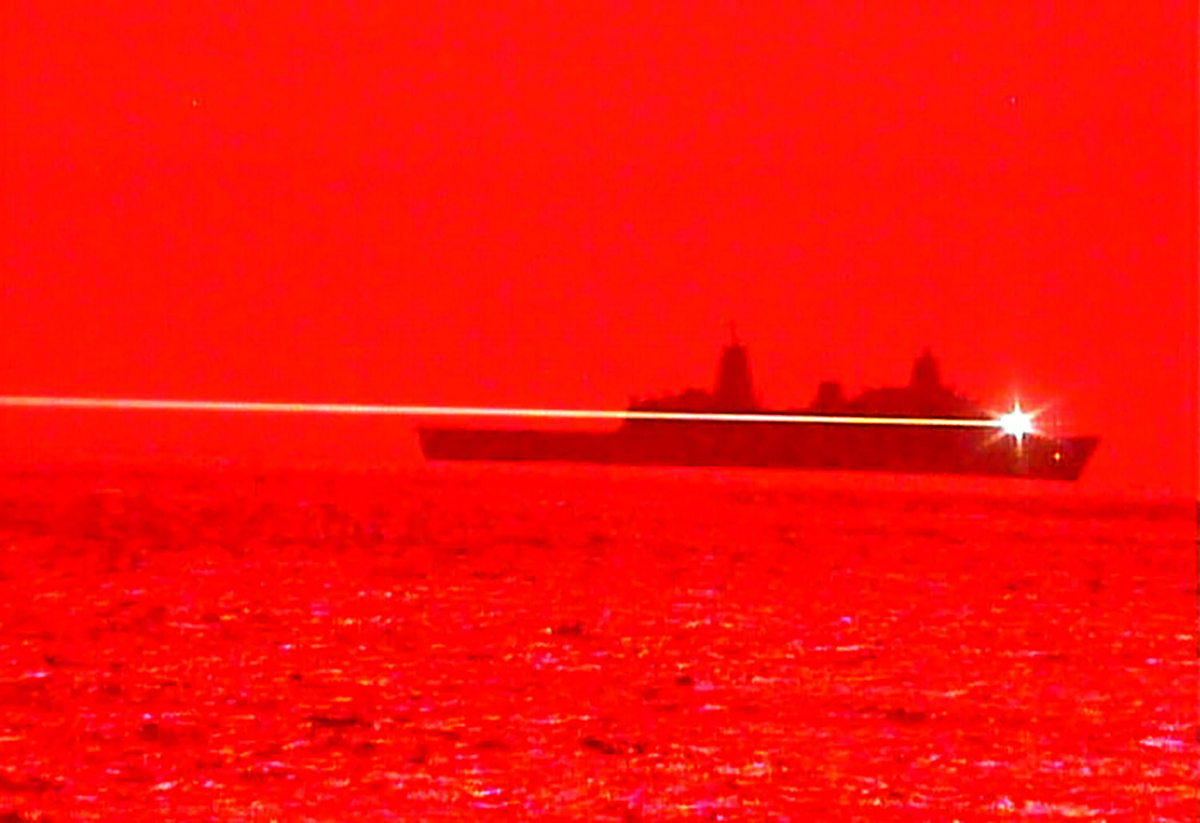 The Office of Naval Research developed a “laser weapon system demonstrator” (LWSD) to demonstrate high-energy laser weapons and installed it on the USS Portland for an at-sea demonstration.

Navy ships are facing increasing threats, such as UASs, armed small boats, and adversaries’ intelligence, surveillance, and reconnaissance systems. The Navy’s DEWs, such as the LWSD, are intended to provide commanders with more decision space and response options.

Conducting advanced at-sea tests against UASs and small craft is providing valuable information about the capabilities of the solid-state laser weapons system demonstrator against potential threats, according to Captain Karrey Sanders, commanding officer of the USS Portland.

The Navy has been working on DEWS, including lasers, since the 1960s. DEWS are essentially electromagnetic systems that convert chemical or electrical energy to radiated energy and then focus it on a target – resulting in physical damage that can destroy an adversary’s capability.

The second iteration of SSL-TM is ultimately expected to be turned into a 150-kw laser weapon, thanks to lessons learned via Office of Naval Research (ONR) demonstrations and testing that began back in 2011. Its original 30-kw laser-weapon system collected data from 2014 to 2017 about how the system performed within an operational setting.

This collected data challenged scientists to make advances in areas such as beam directors and spectral-beam combining, according to the Navy, which uses many layers of different wavelengths to create a more powerful beam.

The weapon has been undergoing testing at a Northrop Grumman facility in Redondo Beach, California, so that engineers could test subsystems to reduce risk before sending the weapon system to conduct land-based testing and then at-sea testing on the Portland.

It will be interesting to see what other types of advanced radar and directed energy technologies – that we can know about –make their way onto ships within the next few years.

Among the most intriguing tech being added to ships or tested this year: Raytheon’s SPY-6 family of radars, Lockheed Martin’s HELIOS system, and a solid-state laser developed by Northrop Grumman.

Raytheon has developed a line of scalable radars, known as the SPY-6 family, which can be designed and scaled to meet the specific mission needs of each ship class. Each variant uses the same hardware and software, and their construction is modular, thereby making them more reliable and less expensive to maintain.

“SPY-6 radars are built from individual ‘building blocks’ called radar modular assemblies (RMAs), or self-contained radars that come in two-foot by two-foot by two-foot boxes,” says Don Schmieley, requirements and capabilities lead at Raytheon (Washington, D.C.) for the SPY-6. “Those boxes stack together to fit the mission requirements of any ship – a feature that makes the SPY-6 family the Navy’s first truly scalable radars.”

Its software baseline is reprogrammable, so that it’s able to adapt to new missions and emerging threats. “And the radar harnesses gallium nitride, a semiconductor technology that enables its 360-degree active electronically scanned array (AESA) capability,” Schmieley points out. “These features mean AESA radars like SPY-6 can automatically adjust radar beams in ways older systems can’t.”

Along with COTS components, open architectures play an important role in the SPY-6(V), which features a fully programmable back-end radar controller unit built out of COTS x86 processors.

“Each of Raytheon’s SPY-6 family of radars is constructed from a common set of components to enable common logistics across the SPY-6 naval battle force,” Schmieley explains.

All SPY-6 radar modular assemblies (RMA) and line-replaceable unit (LRU) cards – the lowest level of component able to be replaced – are interchangeable among platforms with SPY-6 radars. Any technician trained for RMA-based radar maintenance can work on any RMA-based radar, which simplifies radar technician training to a common curriculum. It only takes two tools and one piece of test equipment to maintain the radar arrays of the SPY-6 family. (Figure 2.) 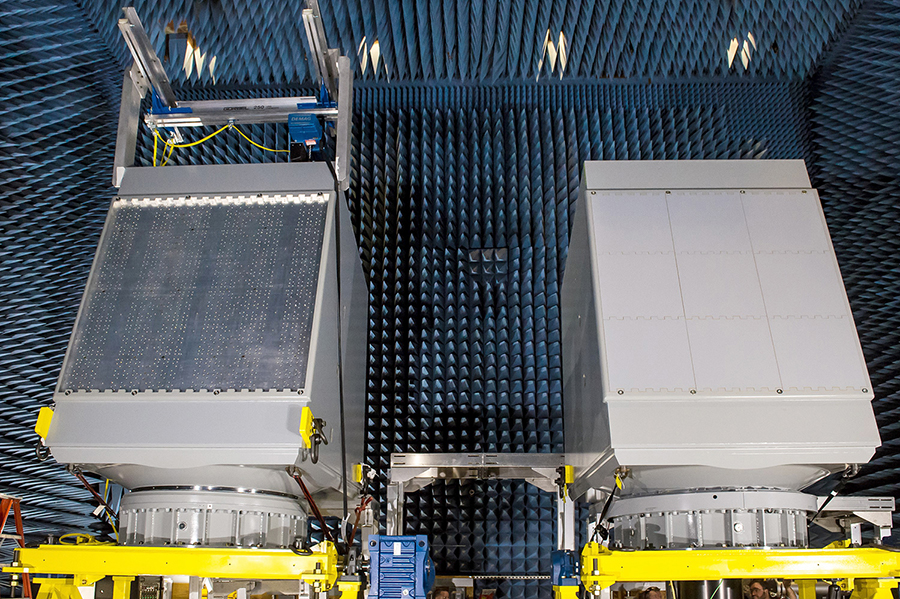 [Figure 2 | SPY-6 radars are built from individual “building blocks” called Radar Modular Assemblies, or self-contained radars that come in two-foot-cube boxes. Those boxes stack together to fit the mission requirements of any ship – a feature that makes the SPY-6 family the Navy’s first truly scalable radars. Courtesy of Raytheon.]

One example in the radar family is the SPY-6(V)1, designed for DDG 51 Flight III destroyers, is known as the air and missile defense radar (AMDR). It has four array faces, each with 37 RMAs, to provide 360-degree situational awareness. This capability provides enhanced range and sensitivity compared to the radar it replaces; it simultaneously defends against ballistic missiles, cruise missiles, antisurface and anti-air threats, plus jamming/clutter and electronic warfare.

SPY-6(V)2 is intended for use on amphibious assault ships and Nimitz-class aircraft carriers. It’s known as the enterprise air surveillance radar (EASR – rotator variant), and has one rotating array face with nine RMAs to provide continuous 360-degree situational awareness

SPY-6(V)3 is for Ford-class aircraft carriers and FFG(X) guided missile frigates and is known as the enterprise air surveillance radar (EASR) (fixed variant). It features three fixed-array faces, each with nine RMAs, to provide continuous, 360-degree situational awareness. It also has air-traffic control and ship self-defense capabilities to deal with cruise missiles and antisurface and antiship threats.

SPY-6(V)4 is for backfit on DDG 51 Flight IIA destroyers, also known as AMDR. This one has four array faces, each with 24 RMAs, to provide 360-degree situational awareness. Compared to the radar it replaces, it has significantly enhanced range and sensitivity.

“It can provide what other radars can’t: simultaneous defense against a wide range of threats,” Schmieley says. “SPY-6’s increased sensitivity allows it to detect and track hard targets like stealthy drones and hypersonic glide vehicles.”

SPY-6’s significantly increased detection ranges will enable ships to “provide coverage for much larger areas and help naval commanders to consider more flexible ship operating areas,” he says. “And it gives them a larger battlespace that may permit changes to weapon inventory and shot doctrine management.”