The BAMS Multi-Function Active Sensor (MFAS) radar system made its first flight as the primary sensor on the UAS.

This flight is the first of many scheduled through October – 30 are planned. The two-hour first flight was performed on a Gulfstream aircraft at a test site in California. Essentially the tests will monitor the radar’s maritime surface surveillance modes.

The MFAS radar will be able to detect, classify, and track targets simultaneously, NAVAIR officials say. The system is a full 360-degree Actively Electronically Scanned Array (AESA) radar system that will provide persistent intelligence, surveillance, and reconnaissance (ISR) coverage out in the open sea and in areas close to shore.

The BAMS UAS program is be deployed within three to four years. BAMS will function as an adjunct to the P-8A Poseidon aircraft and is a part of the overall P-3C Orion replacement strategy. 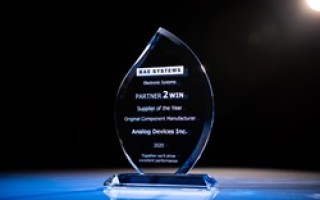 ADI honored with Supplier of the Year award from BAE Systems