Defense prime contractors building highly advanced systems for the DoD are facing the perfect storm of challenges: enemy threats that require highly sophisticated and advanced technology in ISR systems coupled with Defense Acquisition Reform (DAR) guidelines that demand shared risk and the delivery of better solutions, faster and for less money. To weather this storm requires an entirely new, open standards based, approach.

Military strategists consider this the most dangerous time in history for warfighters, not so much because it is known precisely which threats exist, but because the types of threats faced are exponentially more challenging to anticipate and diffuse than in any previous period. Today, tracking smaller, faster targets requires ISR systems to provide exact and minute imaging details to help forces find and fix an elusive enemy. In fact, the DoD is demanding more ISR “assets” as a means to find, fix, and finish unconventional enemies. At the same time, Defense Acquisition Reform (DAR) directives from the DoD are requiring Fixed Price Incentive Firm (FPIF), shortened development cycles, open standards technologies that are easily upgraded over time, and upgrades to existing platforms over building new ones. According to the famous quote by Dr. Ashton Carter, Under Secretary of Defense for Acquisition, Technology, & Logistics, DAR comprises the need for the military to “do more without more.”[1] Under DAR guidelines, prime contractors will have to share more risk by working with FPIF contracts, and smaller businesses will have the opportunity to play a larger role in DoD opportunities.

Changing threats and DoD demands have spawned a new class of technical challenges in the development of ISR systems and driven new open standards approaches, as the presented case study illustrates.

Bringing actionable ISR information to the tactical edge requires the ability to collect accurate data from multiple persistent perspectives, fuse it into meaningful facts, and identify an elusive enemy. Sophisticated sensors have the ability to survey increasingly wider areas and deliver data and images with incredible detail, providing tremendous volumes of multisensor data that can delay existing tasking, processing, exploitation, and dissemination systems.

The sheer amount of data would require thousands of analysts deployed across the globe to analyze and interpret it, and it would never meet the critical need for virtually instantaneous actionable intelligence to find, fix, and finish imminent threats. Coupled with that is the move toward Multi-Intelligence (MULTI-INT), combining data input from multiple sensors and platforms in real-time to improve situational awareness and reduce time to actionable information. The challenge is to create integrated systems that can extract truly critical information through real-time signal processing and deliver it to warfighters.

Under the current Concept of Operations (CONOP), surveillance platforms have downlink capabilities or the ability to transmit signals from a satellite or airborne platform to a ground station. However, these capabilities are extremely limited in terms of bandwidth. In addition, the human capacity to analyze the information in a timely manner is also limited. Typically, if 100 TB of sensor data is collected during a mission, only about 100 GB of that data is analyzed (approximately 0.09 percent). An emerging, more efficient way is to integrate advanced processing on the platform and perform the initial stages of processing and exploitation directly onboard, rather than on the ground. Then, critical intelligence is disseminated as needed. Using the more efficient second method, the platform sorts and analyzes the data, tags information for closer review, possibly compresses the information depending on bandwidth and channel requirements, and transmits it immediately to analysts on the ground and to forward-deployed personnel.

Figure 1 shows an example of such an implementation. There are many possible routes that the Electro-Optical/Infra-Red (EO/IR) data can travel to reach its destination. Onboard exploitation is performed on the EO/IR sensor data; this exploited information can be used by the analyst if delays that are incurred by the channel are acceptable. Compressed and exploited data can also be sent to the analysts and forward-deployed personnel to improve situational awareness. Finally, both raw and exploited data can be compressed and stored, and optionally sent to analysts and forward-deployed personnel as forensic data.

Figure 1: The path of EO/IR sensor data during onboard exploitation

In addition to specific technical challenges like these, DAR is demanding more innovative solutions and requiring open systems, which reduce cost, increase interoperability, simplify upgrades, and allow vendors to choose components based on cost/performance instead of being locked into a proprietary architecture.

Recently, a prime contractor won a highly time-sensitive Quick Reaction Capability (QRC) DoD contract, which required the delivery of a prototype imaging subsystem capable of supporting flight test within one year of receipt of the contract. The highly Size, Weight, and Power (SWaP) constrained subsystem would ultimately be installed aboard a Medium Altitude Long Endurance (MALE) UAV and required multiple advanced electro-optical/infrared sensors.

To meet these constraints, much of the multi-image processing and exploitation capabilities had to reside onboard the platform (onboard exploitation). The real-time and computationally intensive algorithms that comprised onboard exploitation were intended to derive actionable information from streaming sensor data, reducing analyst processing time, mitigating bandwidth and storage requirements, and delivering situational awareness to the warfighter. The application called for greater onboard compute density (in terms of GFLOPS per watt) than existing technologies could deliver; for example, typical CPU architectures deliver less than one peak theoretical GFLOPS per watt – much less than is required for such an intense multi-image application. Additionally, data storage units for image compression and forensic data storage were needed.

The implementation of the required onboard exploitation tasks was a unique challenge. It was decided that transferring the image-processing tasks from a hardware implementation to an algorithmic-based implementation would deliver a faster, more reusable and upgradeable solution. Product line building blocks from Mercury, including GPU processor boards, single board computers, and switch boards, formed the initial backbone of the subsystem.

To secure the required compression and camera interface technology, best-of-breed open standards XMC components were chosen from third parties. Mercury then designed, developed, and tested a 96 TB data storage unit. This open standards approach mitigated the life-cycle costs of a proprietary approach. The result was a high-performance, conduction-cooled, 6U OpenVPX Application Ready Subsystem (ARS) that interfaces with complex sensors and data storage (Figure 2). An ARS is an open standards, application ready, MULTI-INT subsystem for the ISR market. These subsystems comprise building blocks that optimize performance and meet SWaP constraints. Every ARS is derived from hardware, software, services, and systems integration and is designed for a specific application area such as EW, radar, EO/IR, or C4I.

An ARS provides very high technology and manufacturing readiness levels, reduces costs, and shortens development cycles. And because it is based on open standards, it is easily upgraded over time. These are all critical considerations in budget-sensitive, FPIF environments, where the DoD is demanding shorter program implementation times for ISR systems, favoring upgrading existing platforms over building new ones, and forcing prime contractors to focus on a project’s entire life cycle.

Brian E. Perry is Director of Services and Systems Integration at Mercury Computer Systems. In this role, he is responsible for all aspects of the services-led, system-level engineering and manufacturing operations. Prior to joining Mercury, Brian was the General Manager for Suntron Corporation’s Northeast Express, which included responsibility for advanced prototyping, design services, and systems engineering and integration. Perry holds a Bachelor’s degree in Aeronautical Engineering from Worcester Polytechnic Institute and an MBA in Management of Technology from Bentley College. 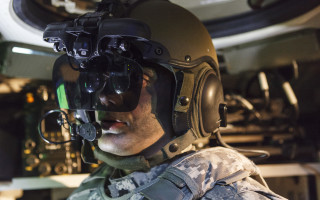 Advanced Reconnaissance Vehicles to be equipped with 360 vision suite