DUGWAY PROVING GROUND, Utah. The U.S Army completed a test on its Ground Based Sense and Avoid (GBSAA); a radar-based system that will allow unmanned aerial systems (UAS) to fly within the National Airspace System and meets Federal requirements.

The system eliminates the requirement of flying an unmanned aircraft with a chase plane or ground observer. Army officials say it displays nearby aircrafts and notifies the operator of potential hazards. The plan is to have developers return to Dugway in the fall to complete the final portion of the test and conduct one full test.

"Today, there is a growing list of UAS units in the states, returned from combat deployments, that need to safely maintain their skills," says John Innes, test lead for Unmanned Aircraft Systems of Redstone Arsenal, Alabama. "The GBSAA will provide that ability to fly within the National Airspace System."

The ground-based radar provides data input to the GBSAA Traffic Display as well as on-board aircraft transmitters that broadcast position. Three separate radars gather data and are combined and compared to data from the aircraft. The operator monitors the Traffic Display for system health, warnings, and aircraft positions. In a separate Alert Display, the ground based operator monitors conflicts by the GBSAA system.

[caption id="" align="aligncenter" width="450" caption="The blue outer ring is the Operational Volume. The green dashed lines ending in arrows are other approaching aircraft. An Alert Display next to this screen lists prioritized warnings for the operator. Photo by Dugway Public Affairs/ Al Vogel. "] 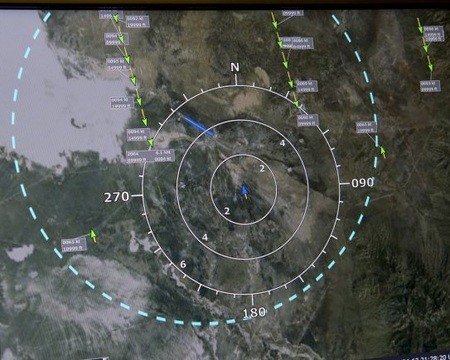 "The warning system allows, at the minimum, one minute to take corrective action," Innes says. "In actual practice, operators would have longer time to take action."

Developers are working to get the next generation of the GBSAA to verbally warn UAS operators, as well as suggest what course to take to avoid mid-air collisions, officials say.

Engineers tested GBSAA four years ago by flying two Shadow UAS on a collision course, Innes says. The same test was conducted recently with two Gray Eagles. In both tests, the GBSAA warned the operator and the UAS of the threat.

Army officials say that they will soon field test the system at five major stateside installations and there are no commercial plans for the GBSAA.

Noise-encrypted radar tech is being developed by U.S. Army