WASHINGTON. U.S. Air Force officials assembled the enterprise capability collaboration team that will explore how the service will continue to lead, operate, and integrate electronic warfare (EW) throughout the electromagnetic spectrum (EM).

To address a future congested spectrum, the team plans to convene a group of stakeholders from across major commands, joint partners, coalition and industry.

"The Air Force and our nation need to maintain superiority in the electromagnetic spectrum," says Brig. Gen. David Gaedecke, Cyberspace Operations and Warfighting Integration director, Office of Information Dominance and chief information officer for the Air Force, who is leading the team in this effort. "The spectrum is so broad, relied upon by all, and increasingly congested; so the first challenge of this effort is to scope the issue."

Gaedecke states that the team will leverage military experts, scientific advisory boards, defense science boards, and industry professionals to build a comprehensive EW and EM strategy. “It's those executable recommendations and how they will align and integrate into ongoing Air Force efforts like multi-domain command and control that are the ultimate goal,” he adds.

To accomplish this goal, the team will spend 12 to 18 months researching and developing a strategy to deliver executable recommendations for the service to maintain competitive advantage in the spectrum.

On February 7, Gaedecke will introduce the team to industry partners during an ongoing Air Force Strategic Development Planning & Experimentation meeting at the Gen. Jacob E. Smart Conference Center at Joint Base Andrews, Maryland.

Electronic warfare is defined as military action involving the use of electromagnetic and directed energy to control the electromagnetic spectrum or to attack the enemy. In late 2017, the Air Force announced it would assemble a team to focus on this capability, as Vice Chief of Staff of the Air Force Gen. Stephen Wilson said, those who dominate the spectrum, win. 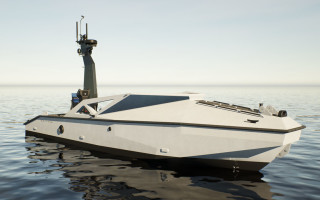