COM-HPC for military: Opportunities and challenges 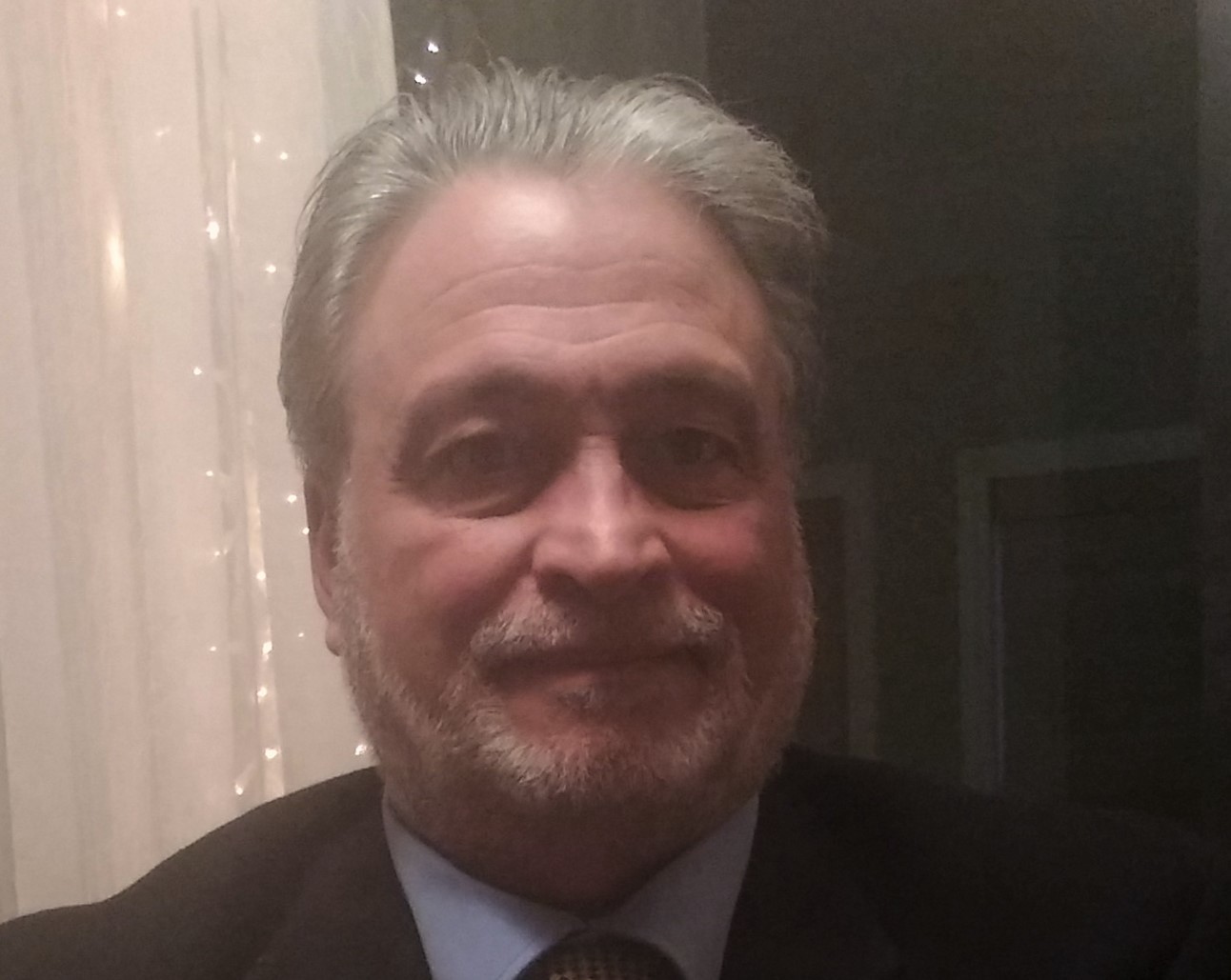 The U.S. military is constantly in search of technology that will lead to improving military capabilities while minimizing the risk to the warfighter. The COM-HPC standard promises to increase the functionality of edge computing and usher in new applications that will forever change the way military operations are conducted. There exist multiple opportunities as well as some challenges related to the adoption of COM-HPC for military use.

COM-HPC is a new computing standard developed and approved by the PCI Industrial Computer Manufacturers Group (PICMG) that was just recently ratified in early 2021. The standard applies to high-performance computers-on-module (COMs). COM-HPC is meant to address the need for high-speed performance in embedded computers and edge servers.

High-performance computing (HPC) is the practice of aggregating computing power to provide higher performance than that which could be obtained from typical workstations. It makes use of technologies such as parallel computing to solve large and complex problems in real time that are beyond the capabilities of traditional computing systems. HPC systems are used in military command-and-control environments to facilitate communication between the tactical operations center and the warfighter.

The COM-HPC standard builds on the current COM Express specification to address the need for more interfaces than the 440 pins COM Express defines; this specified size limits the scalability of powerful new edge servers and negatively impacts their ability to address the requirements of industrial and military applications. The connector defined in the COM Express standard also is reaching its maximum level of performance: It can handle the 8.0 GH clock speed and 8 Gbit/sec throughput required by PCIe Gen 3, but may not be able to adequately operate with new advances like PCIe Gen 4, 5, and 6.

Many of the military applications of computing power need to collect and process data in real time. The military has been interested in HPC since 1992 when the High-Performance Computing Modernization Program (HPCMP) was initiated to fulfill congressional directives to modernize the U.S. Department of Defense (DoD). Its goal was to solve modern military and security problems through the use of high-performing computer hardware and software. The program consolidated supercomputing research being conducted in laboratories and test centers for individual branches of the military like the Army and Navy.

A lot has changed in the world of computing since 1992; for one thing, “the cloud” and edge computing were nowhere to be found at that time. As the technological landscape evolved, the military began to take advantage of advancements such as cloud computing. One of the goals of the HPCMP is to develop systems capable of performing advanced simulations as a basis for predictive modeling. The introduction of the Space Force in 2018 spurred renewed interest in the HPCMP as it attempted to identify technology to assist with exploration, satellite communication, and eventually surveillance and intelligence from satellite and potential weapons systems in space.

The military currently employs HPC solutions in a variety of ways as it finds that the sheer amount of data required for reliable decision-making is growing exponentially. Through the use of parallel computing and the advanced processing capabilities of GPUs [graphics processing units], HPC systems can perform calculations at greatly increased speeds to make the best use of data resources. Applications include:

The benefits of COM-HPC for military use

Edge computing, where processing is done on location instead of at a centralized data center, is becoming more important throughout industry and the military. The ability of field personnel to perform calculations that aid in decision-making can be instrumental in the success or failure of a mission. Eliminating the need to transmit data to be processed saves time and removes a point of failure that could create a critical delay in action to address the mission.

COM-HPC provides a set of technical specifications that address many of the problems that need to be resolved to bring the optimal computing solution to the military. Some of these include:

These features taken together promise to deliver higher-performing systems that are compact, mobile, versatile, and reliable, leading to more successful outcomes.

Different challenges impact the widespread adoption of HPC for military applications. One is cybersecurity, a topic that affects all computing environments and presents additional concerns for systems used by the military. HPC systems must ensure the secure transfer of data and eliminate the possibility for military applications to be compromised, putting the mission at risk. Another challenge is networking: Large networks with hundreds of thousands of endpoints and smart sensors are required to implement the viable edge computing required by the military. Verifying the connectivity and security of these endpoints and sensors is an essential component of implementing HPC systems for military applications.

Another piece of the HPC puzzle: Identifying the right partners when developing HPC systems is of paramount importance to the military establishment. Preference will be given to companies that can show a track record of providing embedded system capabilities that are ruggedized to conform to the needs of military operations. Staying current with new trends and standards such as COM-HPC, the Sensor Open Systems Architecture (SOSA), Modular Open Systems Approach (MOSA), or Modular Open RF Architecture (MORA) are also characteristics of organizations that will be used to supply the computing needs of the military.

High-performance computing comes in different flavors, like GPU versus standard CPU processing. There is also a new PICMG specification that is being developed for small-form-factor HPC, which is based around the COM Express family. COM-HPC has the capability of five times the memory, four times the throughput, and twice as much expansion as the GPU. (Figure 1.) 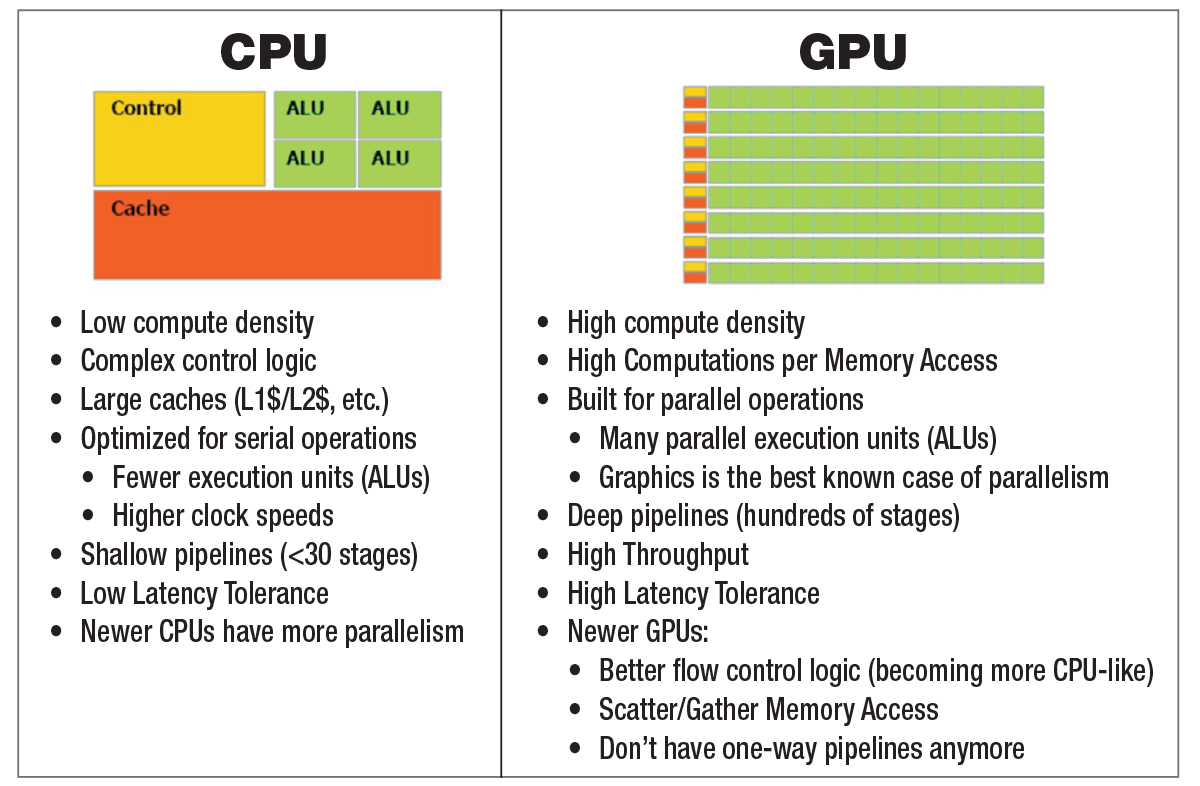 Traditional CPUs have low compute density and complex control logic built for serial operations, shallow pipelines, and low latency. On the other hand, GPU processing has high compute density; performs high computations per memory access; can perform parallel applications; and has deep pipelines, high throughput, and high latency tolerance. The use of GPUs and COM-HPC will benefit military applications tremendously.

High-performance GPU processing can take large-scale feeds of data, in the petabyte range, and transmit video data from the battlefield in real time to users at speeds that can be 12 to 40 times faster than traditional processing. This huge increase enables the warfighter to make complex, real-time decisions on the battlefield, without the need of the data to be processed in the cloud, thus reducing latency. For example, real-time video data from an aerial surveillance mission can be seamlessly downloaded to a ground vehicle, enabling the warfighter to locate and effectively eliminate an adversary in an accelerated manner.

COM-HPC will enable the data to be processed and saved at the edge cloud to retrieve and disseminate information to a team effectively in real time. Adapting COM-HPC servers will offer the warfighter the advantage of high-performance processing in a very effective small form factor, with reduced SWaP-C as a design goal.

The ability to make the most effective use of computing technology may well be the determining factor in military disputes and activities as we advance through the 21st century. The DoD takes this situation as a serious challenge and is attempting to put the most robust and reliable infrastructure in place to keep the warfighter out of harm’s way. With high-performing computing systems that were unthinkable a generation ago, the future looks bright for developments that increase our security while limiting the exposure to the mission and the warfighter. 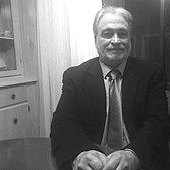 John Reis is senior key account manager, Military Vertical, at Advantech USA; he has more than 30 years of experience in the embedded military computing market.