As commercial and defense aircraft users and integrators look to reduce their costs we see an advent of "more electric" aircraft (MEA) designs. These aircraft decrease operating and maintenance costs with faster and easier maintenance checks, increase aircraft availability by reducing mean time between failures (MTBFs), and reduce exhaust gas emissions because they are lighter, more efficient, and have fewer bulky systems on board. The MEA concept specifically replaces the traditional hydraulic, pneumatic, and mechanical systems with electrical systems, which weigh less, are easier to install and maintain, and improve fuel consumption. The goal is to ultimately have an all-electric aircraft.

Traditionally, all nonpropulsive power is extracted from an aircraft’s engine. Air is bled from the engines’ high-pressure compressor; the pneumatic power obtained from this is used to power the environment control system and supply the hot air for the wing ice protection system. The mechanical gearbox transfers mechanical power from the engines to the central hydraulic pumps – using a system of tubing throughout the entire plane – which provide the hydraulic power for the actuation systems of the primary and secondary flight controls, landing gear deployment, retraction, and braking, as well as numerous other systems requiring actuators. Part of the mechanical gearbox also transfers its mechanical power to the electric generator, which provides electric power to the avionics, cabin, and aircraft lighting, in addition to other loads (e.g., entertainment systems).

Hydraulic systems use mature technology and the possible improvements to efficiency are negligible compared to the improvements obtainable by using electrical technology. The hydraulic system is made up of the central electric pumps that generate hydraulic pressure through tubing that stretches from the engine nacelles, across the firewall, through the pylons, and into the wheel wells, wings, and throughout the entire fuselage. Each of the hydraulic systems requires pressure and return lines plus a case drain for the pumps. These systems are usually triple-redundant, with the tubing protected against the flammable liquids within the hydraulic system. All of this protection, redundancy, and tubing is heavy, however. The MEA, in contrast, enables simpler structural solutions with fewer heat shields and less flammable-fluid protection needed throughout the airplane. This simplification results in lighter aircraft, lower complexity, and lower certification requirements for the structure of the plane.

With a hydraulic system, all of this tubing requires maintenance in case of leakage along the entire tube path, while the engine-driven pumps and pressure seals also require constant maintenance checks. The maintenance of these systems is costly, and yet hydraulic systems have a short MTBF. On the other hand, with an electric system of either electrohydraulic or fully electric actuators, the hydraulic tubing is no longer required throughout the aircraft, drastically reducing the total weight. Airbus estimated that it achieved approximately 1,000 pounds of weight reduction on the A380 aircraft when a hydraulic aileron actuator is replaced by electrohydraulic or electromechanical actuator. Eliminating much of the hydraulic systems also improves the MTBF of the system and makes it more reliable. There are additional improved performance gains, as the hydraulic pump system is a continuous load on the engine, whereas the electric load is on demand/only when needed. All these savings and improvements reduce the overall fuel requirements of the plane and further reduce the cost of operations. Moreover, the efficient segregation and independence of the actuation power provides for robustness to the entire system. Figure 1 shows the deployment of electric and hydraulic actuators on the Boeing 787 airliner.

Figure 1: Electric and hydraulic actuators on the Boeing 787 airliner. Drawing courtesy of Microsemi.

Challenges to MEA on actuators

Major challenges exist to the development of more electric aircraft, one of which is the monitoring and distribution of power. There is a need for networked electronic control for all the electrical systems distributed throughout the entire aircraft. With each system now requiring electric power, the controls architecture must be improved and resilient enough to handle the high reliability requirements of systems such as the flight controls system. Each actuator has electronics that perform the motor control and health monitoring of the actuator, providing feedback to the flight controls. These actuator electronics are exposed to harsh environmental conditions in terms of operating temperatures, pressure, and altitude. The newest flash-based field-programmable gate arrays (FPGAs) are capable of performing in these harsh environments with high reliability.

With the MEA concept, the electrical actuators now being designed often use permanent magnet brushless AC motors, which require sophisticated electronics to perform control and monitoring functions. Development of the proportional-integral (PI) controller, space vector modulation, pulse width modulation (PWM), rate limiter, position and speed estimator, and other such tools for the control and monitoring of actuators is time-intensive and requires robust validation and verification before they can be used on aviation actuators. There are many ways to address this issue, including the use of microcontrollers (MCUs), digital signal processors (DSPs), application-specific integrated circuits (ASICs), and FPGAs.

MCUs and DSPs are traditionally used for algorithm processing in single- and dual-axis motor control designs. The MCUs and DSPs are not as capable as a flash-based FPGA solution when dealing with the mounting requirements for health monitoring, reporting, secure communications, and multi-axis or high rotation motors. Flash-based FPGAs offer greater performance than MCU/DSP-based solutions for high-speed, low latency algorithm processing, as well as enabling the integration of additional systems’ functionality to further improve the total cost of ownership.

Optimization of power electronics for motor control applications on the aircraft requires a wide band of switching frequencies to improve the performance of the system. The DSPs and MCUs do not perform well in applications requiring operation in the higher range of the switching frequencies. Some DSPs may optimize a few channels for high-frequency switching, but they lack the ability to quickly adapt to the changing requirements. They also lack the ability to add more pulse width modulation (PWM) channels to control the power electronics stage. In current systems, this requirement is often offloaded to an FPGA. ASICs and application-specific standard products (ASSPs) have the same flexibility and scaling challenges that DSPs and MCUs have.

Motor control design benefits greatly from reduced static and total power, especially at high frequencies and temperatures. FPGAs that feature an embedded single-transistor flash cell offer an advantage over alternatives that use a six-transistor SRAM cell that must be configured from an external ROM during power-up. The latest flash-based FPGA solutions use a comprehensive approach to minimize power resulting in 50 percent lower total power and 10 percent lower static power than SRAM-based FPGA solutions.

Many of the problems with the increasing complexity of motor controls for the brushless AC motors being used on MEA actuators can be solved with the implementation and use of flash-based FPGAs as their primary controller.

Initial transition towards MEA targets the use of electrohydraulic or electromechanical actuators. This design transition is introduced through the power drive electronics (PDE), which uses the electrical power supply as opposed to the conventional hydraulic supply to control the actuator surfaces. The PDE Power Core Module (PCM) includes the Hybrid Power Drive (HPD), which performs the power conversion and drives the actuation motors. The PCM also contains data conversion and communications features which are implemented and controlled using an FPGA.

The motor control algorithm is embedded within the FPGA, which is located in the PDE Command Module. This FPGA is programmed to perform various functions such as acquisition of position and speed information from external sensors, data processing for motor control and communication.

The Monitoring Module is required to monitor the health of the PDE. This safety-critical function is also implemented using an FPGA.

The integration of power drive electronics is already evident in modern commercial aircraft such as the Boeing 787 and Airbus A380, but advancements in technology, efficiency, reliability, weight, and cost are required before airframers will adopt an all-electric actuation system.

Since the IP is built into the FPGA, it is easier to certify than software running on an MCU or DSP because there is no need for DO-178C certification. There is additional validation and verification documentation available in VHDL that helps designers qualify their designs for DO-254. Associated software is also available that gives the designer full access to motor-control parameters such as reference speed and Kp/Ki gains of PI controllers.

For any electronic equipment on an aircraft, there is the ever-present danger of single-event upsets (SEUs). Electronic devices experience neutron effects as much as 500 times more frequently at aviation altitudes than at sea level. This high level of neutron radiation leaves SRAM FPGAs extremely vulnerable to configuration upsets, which change the functionality of the FPGA until detected and corrected. However, in extensive neutron radiation testing, flash-based FPGAs have seen no single-event configuration upsets or single-event latch-ups (SELs). The testing had over 1.1 x 1,012 neutrons /cm2 of total exposure, which is equivalent to more than nine million years at sea level in New York City, or 17,400 years at 40,000 feet of altitude above New York City. This intrinsic immunity to configuration SEU and SEL effects reduces requirements for redundancy and radiation protection, thus reducing the complexity of future designs.

The way forward to MEA has begun already with the Airbus A380, A350, and the Boeing B787 designs and their military equivalents, as actuators on MEA will use increasingly sophisticated electronics. Flash-based FPGAs are immune to loss of configuration at aviation altitudes due to neutron radiation and have a large operating temperature range. In addition, a comprehensive suite of motor-control IP is available to support the rapid development of complex control and monitoring functions in electric actuators. For these reasons, actuator control systems for MEA programs are choosing flash FPGAs.

Shen Wang is an undergraduate student at the University of Toronto, studying Electrical and Computer Engineering. He is currently serving an internship in technical marketing at Microsemi Corporation, specializing in electronics in commercial aviation applications. 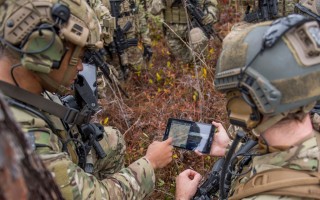 Tactical-communications platform from Draper Labs gets additional nod from U.S. Department of Defense 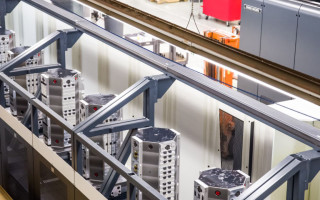