Adversarial electronic warfare (EW) threats have become quite complex and the U.S. Department of Defense (DoD) has made countering them a funding priority. These countermeasure and detection systems are depending heavily on radio frequency (RF) and microwave technology that also must meet stringent size, weight, and power (SWaP) requirements.

“The U.S. and allied nations’ defense market will be trending up considerably for RF/microwave electronic warfare components, subsystems, and full products,” says Sean D’Arcy, director of Aerospace and Defense for Analog Devices. “Mature and emerging adversaries have become extremely sophisticated during the past 20 years and present novel threats that need to be rapidly addressed with point solutions.”

As D’Arcy points out, EW is no longer spectral domination purely on the battlefield or even at the theatre level – EW has expanded to worldwide antiterrorism efforts and even into space. “This requires greater resources to address and mitigate while maintaining U.S. and allied spectral superiority and operations,” he says.

The EW market for RF components has remained fairly steady since the COVID-19 pandemic began. “Last year, there was a dip based on market trends across the board but we’ve seen interest and opportunities turn back on,” says Gavin Smith, marketing manager of the Radio Power Business Line for NXP (Chandler, Arizona). “Like the rest of the market, end customers and design houses paused a bit during the first few months of the pandemic and have now continued designing and working on next-gen solutions. We’re seeing increased interest in L-band as well as wideband communications.”

Threats are becoming more agile and moving higher within the spectrum, according to D’Arcy, thereby putting pressure on designers crafting RF and microwave solutions for EW systems.

“Frequency-hopping is now more complex, and adversaries are moving as high as 130+ GHz for use in military terrestrial and on-orbit systems,” D’Arcy explains. “Furthermore, there is a need to incorporate more sophisticated digital methods into electronic attack or defense systems, which will require greater speed and efficiency when moving the signal of interest from analog to digital and back.”

Analog Devices’ customers are driving design shifts within three major areas. “The first is the continued drive toward creating high-performance RF and microwave products that have wider bandwidth and support much higher regions of the spectrum with increased efficiency,” D’Arcy says. “This requires advances in gallium nitride (GaN) amplifiers, up- and down-converters, filters, drivers, and exciters.” (Figure 1.) 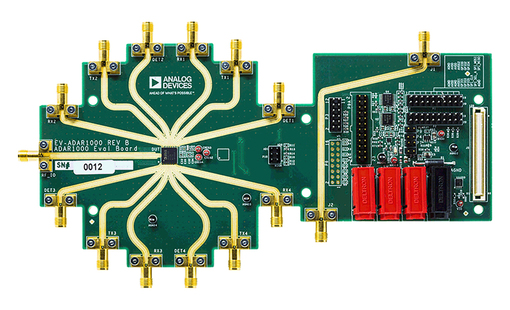 The second area experiencing a shift is a need for higher-speed converters with more bits. “For both high-speed analog-to-digital (ADC) and digital-to-analog (DAC) converters (digitizers), the push is to enable direct sampling by exceeding 20 Gsamples/sec and above with an increasing number of output and input bits,” D’Arcy says. “Of equal importance, due to the ability to defeat systems with measurable processing delay, is the requirement to reduce latency at the converter and the FPGA [field-programmable gate array] that is induced prior to data reaching the digital backbone. Bent pipe or digitally controlled analog still have significant use due to their minimal latency.”

To drive this reduction in latency and manage the scale of the greater data, “more processing fabric is being incorporated into the digitizers,” he adds. “This allows for extensive digital decimation and loopback control to be done closer to the antenna for the ADC signal chain. Conversely, fabric to enable digital data expansion and beamforming are being incorporated into the DAC for its related signal chain.”

Another design trend emerging is increasing demand from the DoD for trusted RF and microwave solutions, coming as adversaries develop new electronic capabilities. “It’s no longer acceptable to develop a single system that can be fielded for 10 years without regular modernization,” says Ken Hermanny, senior director and general manager of Mercury’s West Caldwell, New Jersey, facility. “We leverage open standards from chip scale to system scale to incorporate the most advanced technologies and make them accessible to our aerospace and defense customers.”

Yet another trend is dual-purpose solutions. “In the past, we offered banded-solution approaches leveraging our cellular infrastructure devices,” Smith states. “As a key component supplier within the cellular infrastructure market, many of the same devices used for communications also had a dual purpose for electronic warfare. Similarly, in both spaces we’ve seen more demand for integration within the package, saving space and complexity of overall system designs. Along with further integration, many customers want more power and wider operating bandwidth to cover multiple bands with a single device.”

As new electronics threats extend into higher frequency bands and increase in complexity, end users are requesting microwave EW hardware that operates over a wide range of frequencies while also being small enough to support multiple channels within a single compact system. “To rapidly deploy these advanced capabilities, our customers are increasingly requesting products compliant to open architecture standards, such as OpenVPX and SOSA,” Hermanny says.

Open architecture initiatives like SOSA – Sensor Open Systems Architecture – “are helpful in driving alignment and it’s one of the considerations along with programs like DARPA CHiPs,” D’Arcy says. (The Defense Advanced Research Projects Agency [DARPA] launched the Common Heterogeneous Integration and IP Reuse Strategies [CHiPS] in 2017 to help lower the design costs associated with advanced systems-on-chip.) “At present, the challenge is to move the end users and primes toward the standard.”

Ongoing initiatives and trends like SOSA are helping the “push for more commercial off-the-shelf devices that aren’t subject to certain restrictions,” Smith notes.

“As the industry turns toward standards like SOSA, there is a need to develop SOSA-aligned RF and microwave hardware,” Hermanny notes. “The adoption of these standards has the opportunity to revolutionize the way electronic warfare systems are designed and maintained. By leveraging standard modules, design time and sustainment costs are reduced. [Mercury offers] a family of SOSA-aligned microwave transceivers and converters, such as the RFM3111, a SOSA-aligned 6- to 8-GHz transceiver.” (Figure 2.) 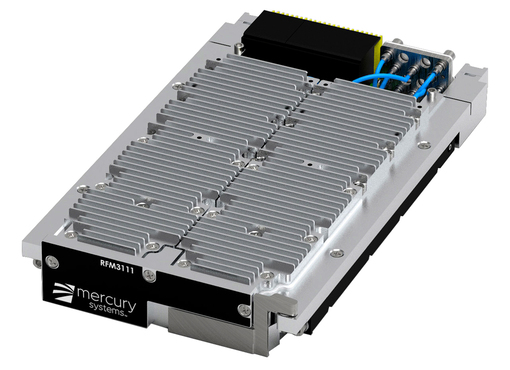 Although the holy grail was originally a single flat-plate array to be used for military communications, EW, and radar, according to D’Arcy, the unique concept of operations and different time-to-market requirements have made a single system a difficult proposition with the present generation.

“If you look at the historical and present generations of radar versus electronic warfare, the designs are significantly different,” D’Arcy says. “Electronic warfare is split into surveillance, defense, and attack, while radar is in essence an active sensor. A good way to look at it is that electronic warfare systems defend against or attack radar.”

Legacy systems are very different because of their significant analog content. “But newer systems start to blur the difference at the signal-chain level, as designers move more toward active electronically scanned array and on to full direct sample and digital-beamforming systems,” D’Arcy continues. “These systems will have commonality from the antenna through to the digital backplane. Both the ADC and DAC paths will be similar at the individual channel level. The difference within back-end processing and the digital side is where divergence will occur.”

One key similarity between EW and radar requirements is the demand for increased capability within a single transistor. “For radar, the power levels continue to be much higher than requirements for electronic warfare or communications,” Smith notes. “In many cases, the key metric for radar is efficiency – always trying to push the boundaries and achieve as high efficiency as possible. Efficiency also matters within EW, but it’s based on the market bandwidth and integration.

While both radar and EW require high-performance solutions in compact SWaP-optimized packaging, Hermanny points out that EW has its own unique challenges: “Unlike radar, where both transmit and receive sides of the system are defined, an electronic warfare system must operate on previously unknown signals,” he explains.

Size reductions are “primarily driven by the shrinking geometries of antennas and the need to shorten the signal path,” D’Arcy says. “While weight gain is a concern, the greatest challenge to the industry is power consumption and efficiency. And this is directly related to thermal challenges. The way to resolve these challenges is twofold: The continued march toward greater efficiency in GaN-based RF and microwave products is a key contributor to efficiency improvements for power and, to a certain extent, size. The other is incorporating more processing fabric into the digitizers to draw down component count and high-power draw processing where applicable.” 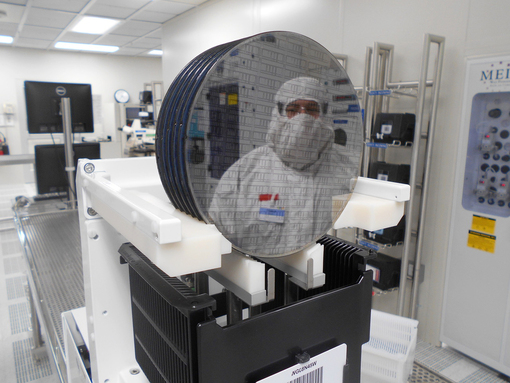 SWaP is a key aspect of NXP’s engagements within defense and aerospace, and because of its importance the company continues to add more integration into parts. “We accomplish this via improvements within our discrete-devices offerings, packing more power into packages while also prioritizing thermal performance,” he continues. “By stretching the capabilities within our discrete offerings, customers are able to use one device as opposed to a banded approach. We’re also continuing to make improvements in our integrated circuit (IC) offerings for both radar and electronic warfare. These multistage devices enable customers to shrink the elements around the board because of the in-package integration.”

Another way NXP is making SWaP improvements is through multichip modules. “These devices are similar to the ICs because they’re multistage but also have matching elements that are multistage with 50 ohm in and out,” Smith says. The added integration enables reduced space and weight while achieving necessary performance,” he adds.

“In terms of RF and microwave, one of the challenges of SWaP optimization is managing the complex electromagnetic interactions that result from high-density circuit design,” Hermanny says. “To address these challenges, we developed expertise in complex circuit modeling using both nonlinear circuit models as well as advanced electromagnetic field-solving techniques. This allows us to minimize design time and achieve highly compact hardware without relying on multiple design spins.” 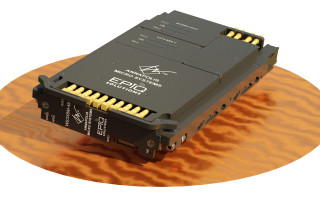 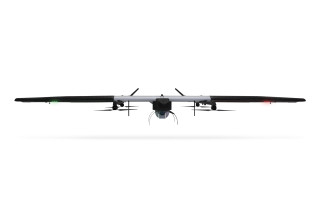