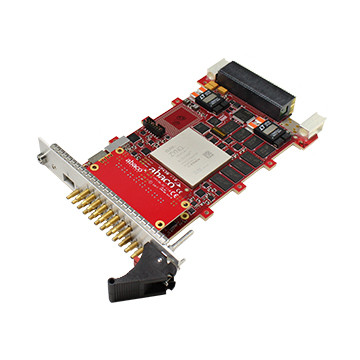 The VP430 is one of the densest 3U VPX analog FPGA carrier boards available with the ability to synchronize all 16 channels and multiple boards for even larger system applications. In previous generations of technology, this combination would have required four times as many boards.

Many RF and signal processing systems require both a streaming DSP with an FPGA and a general purpose processor for decisions and control. Previously, these processing requirements were handled by separate modules. With the VP430, it is possible to get both functions in a single module by leveraging the RFSoC technology.

The VP430 has a traditional VPX data plane interface, allowing a x8 PCIe™ Gen3 connection to a host computer. With eight ADCs sampling over 4GSPS with two bytes per sample, the PCIe Gen 3 high speed data connection is too slow for a direct transfer. To overcome this challenge, the VP430 includes – in addition to the PCIe Gen3 data plane – an optional 8-channel VITA 66.4 fiber optic interface for transfers up to 12 GB/s.