Large-scale radar systems are critical to U.S. national security, giving troops advanced abilities to detect and combat enemy strikes. As the demand for increased distance in coverage grows, more electronics are used, with the resulting waste heat becoming a primary challenge for designers. There exist a number of practical solutions to expand thermal capacity while staying mindful of size, weight, and power (SWaP) considerations.

The thermal challenge for large-scale radar systems can be highly complex. Losses in the system can result in waste heat ranging from tens to hundreds of kWs, primarily from discrete electronics throughout the antenna and control system. The problem is amplified when adding in mechanical requirements (often vehicle-mounted or requiring rotation/movement to enhance coverage) and environmental requirements (large range of operating temperatures, MIL-STD-810-G requirements, etc.). The thermal-management system must therefore be robust and high-performance. To break down the challenge and technology options, three areas of the overall thermal-management system (TMS) must be examined: local, high-heat flux electronics; the systems liquid loop; and the ultimate heat-rejection system.

Discrete electronics are a key piece of a radar’s functionality. As electronics and power amplifiers increase in power densities, the need for more advanced heat spreading becomes critical. In many cases, the challenge is to manage the local heat flux with highly efficient heat transfer to the next-level thermal assembly – in this case, the liquid loop.

Aluminum spreaders are often used due to weight and producibility considerations; however, they are limited in conductive heat transfer by their ~180 W/m-K thermal conductivity (k). Lower k-values lead to local hot spots and failures well before the heat gets to the primary cooling solution. To combat this issue, passive two-phase heat transfer can be considered. By utilizing the latent heat of vaporization, one can achieve heat transfer rates in an order of magnitude greater than metallic conduction.

In rugged systems, the most common passive two-phase heat-transfer devices are embedded heat pipes. Heat pipes are closed-loop devices that are implemented near the critical electronics to promote fluid vaporization. This section is commonly known as the evaporator. From here, an internal pressure gradient is created, rapidly transporting the fluid vapor to colder regions of the heat pipe. The fluid gives up its latent heat at the condenser, which is coupled to the system’s heatsink. The internal wick structure passively pumps the fluid back to the evaporator section using capillary force (See Figure 1). 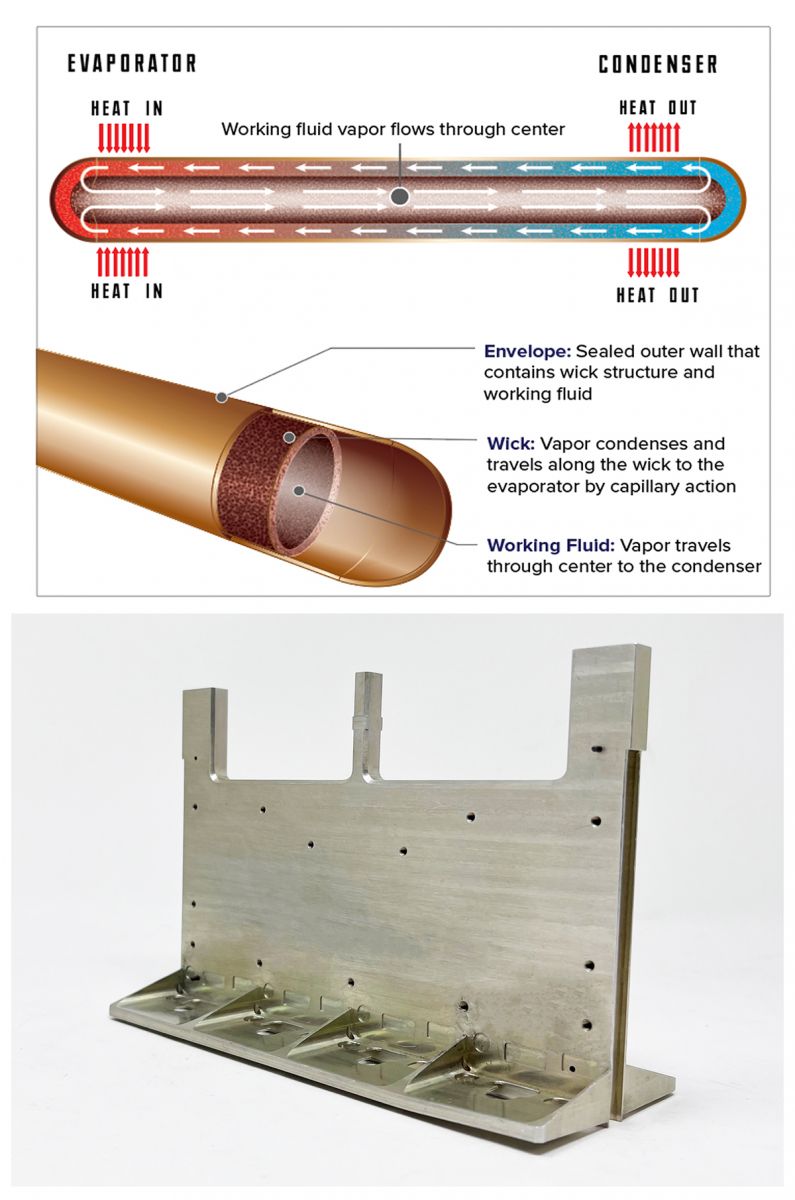 When embedding heat pipes into a structural heat spreader, the resulting solution is known as a high thermal conductivity plate. A practical example of such a solution used in a radar application is shown in Figure 1: In this instance, several heat pipes were strategically positioned and implemented vertically into the T-shaped design. The base of the mounting frame was coupled with the higher-level thermal solution, and the discrete electronics were mounted on the vertical face. In terms of performance gains, these plates have demonstrated keffective ranges between 500 and 1,200 W/m-K, depending primarily on length. Also to be considered when deciding to use the technology: nonthermal benefits including little to no impact on weight, little to no impact on structural strength, and passive operation with no power consumption and long life.

Now that options for local heat-spreading improvement have been determined, the next step is to examine the system-level heat transfer. In this example of a large-scale system, the base design is a single-phase liquid loop. Air cooling is an option for lower-power systems, but in many cases, a liquid solution is required to meet waste heat and environmental requirements. In defense applications, it is common to use glycol-water fluids, which have favorable thermal properties and are often readily available at various integration sites. While single-phase fluid has a lot of merits and fielded heritage, a higher-performing option is pumped two-phase (P2P). Like heat pipes, this technology uses two-phase heat transfer to take advantage of the fluid’s latent heat phase. It requires similar architecture and components as single-phase designs (see Figure 2) while offering lower power consumption and lower overall mass. 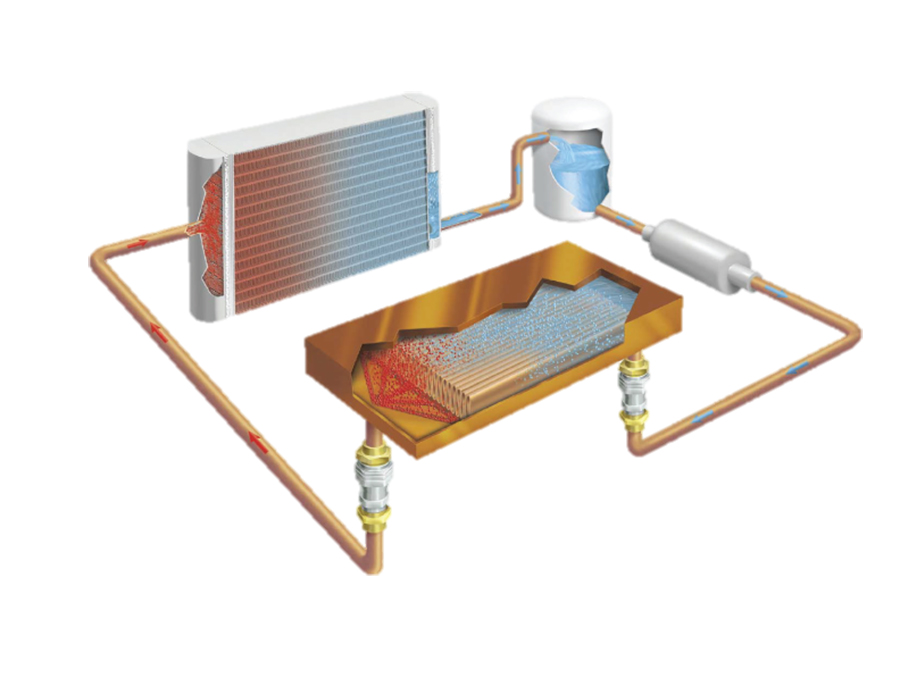 In many cases – but specifically in phased array radars – it is desirable to have consistent temperatures across a system’s electronics. This adds to the reliability and performance of the radar system. A P2P system can achieve much tighter isothermality than single-phase cooling solutions due to the two-phase heat transfer. In a single-phase system, heat is dumped into the fluid, increasing fluid temperature. This is apparent by the governing mass flow equation shown in Equation 1; as power (Q) increases, the temperature difference from inlet to outlet increases (∆T), assuming fluid properties and flow rate remains constant.

In a P2P system, conversely, the temperature is absorbed in the latent heat of vaporization, and the fluid quality adjusts as heat enters the fluid (Note: to optimize performance, there are engineering considerations to maintain the fluid within a given fluid-quality range). The system can also be sized for low flow rates since fluid velocity is not the driving factor in performance, ultimately leading to compact and lightweight solutions. Additionally, P2P systems have ancillary benefits, such as the use of dielectric working fluids, modular/scalable designs, and the ability to handle higher heat flux than traditional fluid loops. Such systems can be used in radar, directed energy, and medium- and high-voltage power electronics applications.

Controlling temperature and rejecting heat are the final elements of an effective thermal-management system. While many above-ambient, standalone P2P systems can offer fluid controls and integrated air-side heat rejection, most military applications require cooling below ambient air temperatures. Liquid chillers, which leverage vapor-compression technology, are often considered in order to precondition the fluid. This chilled liquid can be provided directly to the system’s liquid loop or a liquid-to-liquid heat exchanger as geometry or fluid selection require. The challenge in these chiller systems typically revolves around the harsh defense environment and must then encompass unique, rugged design considerations; the compressor, radiator, fans, and control electronics must all survive the shock, vibration, and weather conditions often found in military environments.

Tekgard chiller systems, which are suitable for use in mission-critical applications, range from 8 to 24 kW of capacity. A fielded example of a harsh-environment use – on the Ku-band radio frequency system (KuRFS) is shown in Figure 3. 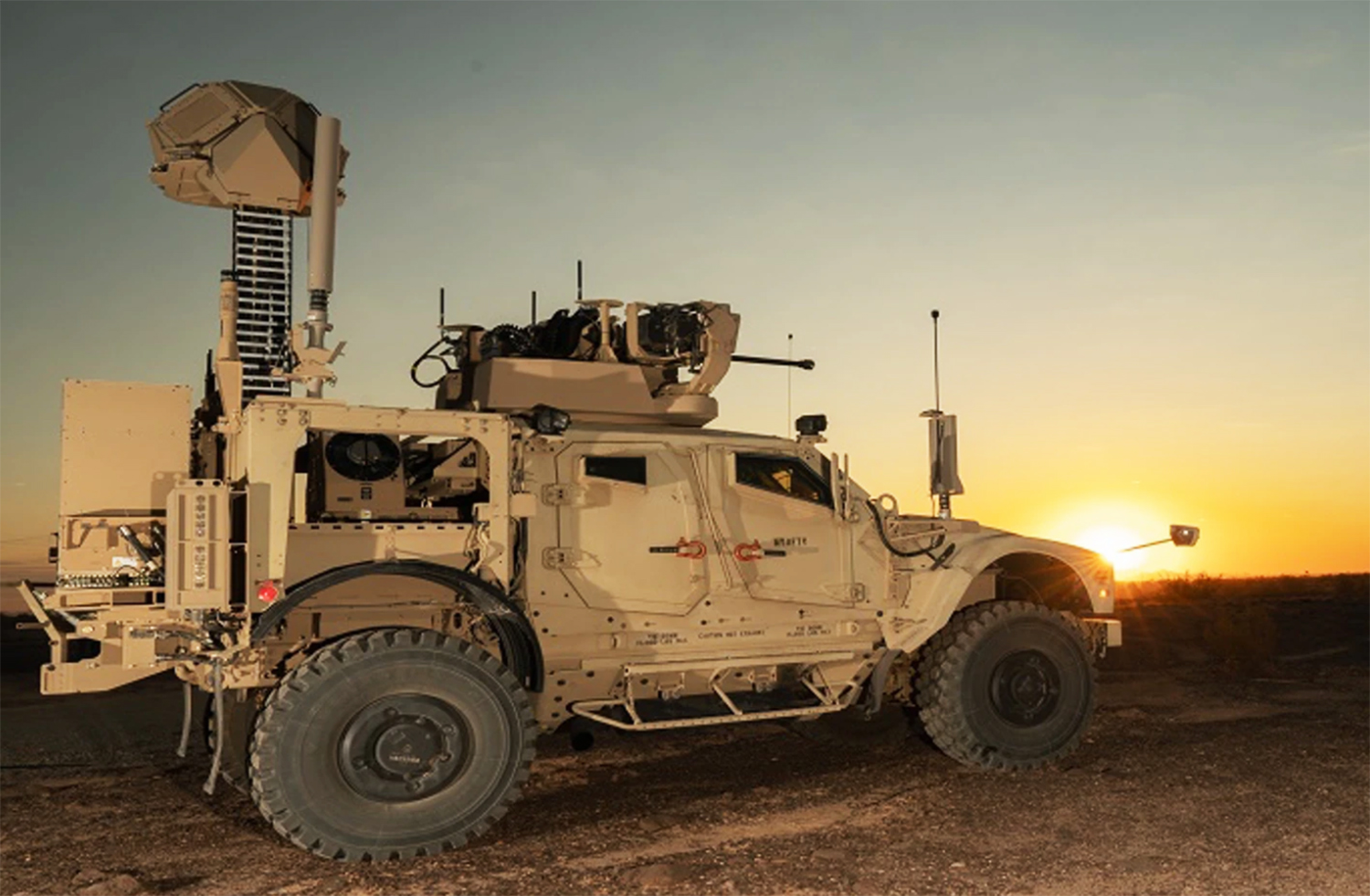 Thermal management is key to protecting electronics and extending system life of critical radar systems. As requirements become too challenging for traditional cooling methods, it is beneficial to have options to expand capacity and maintain or reduce the size, weight, and power (SWaP) consumption of the systems.