ATLANTA. The AUVSI Unmanned Systems show that was held in Atlanta last week used to be about the drones or unmanned platforms themselves then it morphed into being about the sensor payloads they carry and the capability these systems bring warfighters. It's still all about the payloads, but it's not just about the warfighter anymore. The event and the industry are moving from a military centric one to one that serves law enforcement, agriculture, weather monitoring, media coverage, and even Hollywood.

The military is still the primary user of unmanned platforms -- air, ground, surface, or undersea -- but they are not the growth market, that will be the commercial world. The organizers feel the same way hence why they say they are changing the name from Unmanned Systems to "Xponential, an AUVSI Experience" and holding the event in New Orleans as opposed to rotating it back to Washington every other year -- hence my headline. I definitely see the potential for autonomous systems in other markets, although I'm not thrilled with the name change. We will save that for another blog on inexplicable show name changes.

Regardless of the name it is definitely on track to become in the long run a commercial event rather than a military one.

As Malcolm Quon, Vice President, for Unmanned Systems, at Elbit Systems of America put it, "A lot of the stuff we do is COTS and the reason is that there really isn’t any military technology anymore. Everything is COTS. In the 1960s and 1970s the military was leading driver of technology, but now they are consumers of technology." He made these comments and others in our COTS Confidential roundtable about the Unmanned Systems show. To read it click here.

Exhibitors at the event ranged from all types of industries, including Hollywood. One that stood out was Amimon from San Jose, Calif., and their product Connex, which delivers wireless HD not through WiFi, but via a video-modem technology developed from the ground up through algorithms, chips, firmware, RF etc., and therefore can deliver full HD zero latency over long range, says David Shefler, Vice President, Global Sales and Business Development at Amimon. It enables command and control of unmanned aerial vehicles (UAVs) and their payload gimbals with zero latency. However, this was not developed for military platforms, it originated as a way to control cameras wirelessly in film production.

Their demo system from the event is pictured above. Its transmitter is connected with an HDMI cable, is battery powered, and enables telemetry data to be transmitted over their wireless link directly to a controller's screen. It has a range of as far as one kilometer. "The solution is a game changer because it has zero latency and essentially comes in a box and can be assembled in less than five minutes, which saves money on training and maintenance," Shefler says. "We call it plug and fly." For more on Amimon and Connex, visit www.amimon.com. 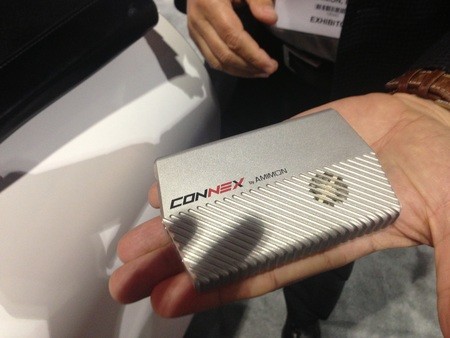 Another demo that stood out was taking place at the ENSCO booth (pictured below), where they and their partners led by Stephane Roy, President of Roy Aircraft & Avionic Simulation, demonstrated how manned aircraft avionics simulation can be adapted for unmanned aircraft platforms leveraging COTS technology. For more on ENSCO and Roy Aircraft, visit www.ensco.com and www.raasi.ca. 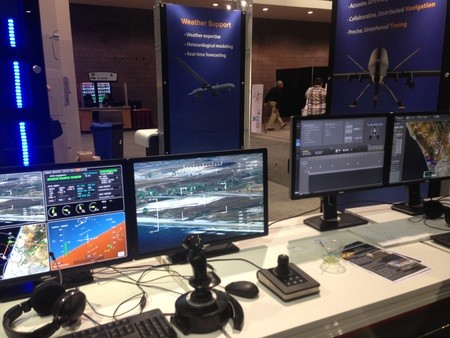 Sensor processing is what drives innovation in unmanned system payloads today and is the sweet spot for many companies in or industry such as Tech Source, Mercury Systems, Curtiss-Wright Defense Solutions, GE Intelligent Platforms, CES, IXI Technology, Hartmann Electronic, Pentek, Crystal Group, Galleon Embedded Computing, and others -- all were at the event.

Stabilization technology was also rampant at the event with companies such as SightLine Applications, XSENS, Sensonor, KVH Industries, and VectorNav.

Lastly I found the technology from Time Domain quite interesting. They are taking their Ultra Wideband (UWB) technology that enables low-power radar devices in GPS-denied areas to develop sense and avoid solutions for unmanned systems. I also found it interesting that they are looking to use the radar for golf carts, so they can sense their owner and follow them around the course -- an unmanned caddy so to speak. To learn more about their technology, visit www.timedomain.com.

Organizers say attendance at the event was similar to 2014 with about 8,000 visitors. Exhibitors totaled 576.