MicroTCA: A force to be reckoned with for military, aerospace applications

For applications requiring high performance, versatility, and reliability in a backplane-based system, the three main choices for open-standard computing architectures are OpenVPX, MicroTCA (MTCA), and AdvancedTCA (ATCA). For military and aerospace applications, AdvancedTCA often can?t compete on size, weight, and power (SWaP) unless its massive throughput is critical. Of the two remaining primary options, MicroTCA recently has been chosen over VPX in several new military and aerospace applications where VPX once dominated, ranging from airborne and naval settings to ground-vehicle-mount and fixed radar installations.

MicroTCA has been around for eight years now, but in the last 18 months, it has seen increased interest from and adoption by the military and aerospace community. Why is MicroTCA increasingly beating out VPX? To begin with, MicroTCA is a commercial off-the-shelf (COTS)-interoperable architecture, with rugged specifications already ratified and available. Its mature, proven architecture has seen some high-performance advancements, while the vendor base has stabilized and improved. Moreover, low price is now a top tier concern for prime contractors.

MicroTCA originally stems from AdvancedTCA, which has been around for more than 10 years. The MicroTCA advanced mezzanine card (AMC) was a mezzanine approach that plugged into ATCA carrier blades. Subsequently, the PICMG group proposed a solution for these AMCs to plug directly into a backplane, called MicroTCA. Most importantly, the specification adopted the shelf-management/intelligent platform-management interface (IPMI) features of AdvancedTCA.

The key characteristics of MicroTCA are its modularity and scalability. The open-standard architecture is also fully redundant (meaning no single point of failure exists in the architecture). It boasts a 99.99999 percent uptime, has hot-swappable modules, and can handle high-speed serial as fast as 10 Gbps per lane (40 GbE is in draft specification). Its clock distribution has redundant clocking options, while its truly open COTS architecture is applicable to multiple markets (military/aerospace, communications, physics, etc.). The MicroTCA architecture is also available in commercial and rugged versions.

VPX is also a high-speed serial, modular, open standard architecture, offering considerable flexibility and I/O pins in a rugged form factor. However, VPX does not have the inherent system management, e-keying, clocking, or inherent interoperability of MicroTCA. MicroTCA is also smaller, at 75 mm x 180 mm – compared with 133.25 mm x 160 mm for VPX – providing an advantage in the “S” and “W” portions of SWaP (the typical card pitch is the same).

In poker, the weak hands will often fold when the bets get bigger. In the embedded industry, the less serious vendors will pack their bags when they realize that they can’t continue to invest in or support the product line to remain competitive. When MicroTCA first arrived, dozens of vendors entered the market without fully understanding the specification and what was required to succeed. At the same time, the specification seemed overhyped, promising to be everything to everyone. The result was a bubble of vendors who introduced, in too many cases, products that did not meet the specification. This misstep left a bad taste in the mouths of many frustrated customers. In contrast, the vendors developing today’s MicroTCA products are experienced in the architecture and are able to provide a quality ecosystem of interoperable products. Dozens of interoperability workshops have been presented over the years to ensure that various vendors’ products work well together.

Figure 1: An example of MicroTCA.3 modules in conduction-cooled clamshells and an ATR chassis. Standard AMCs can easily be ruggedized with the clamshells to meet MIL-STD shock and vibration levels.

MicroTCA has been used in benign-environment military applications for many years. In 2011, MicroTCA.3 was introduced, providing hardened conduction-cooled options for standard AMCs (see Figure 1). The rugged clamshells provide stability for the connector. MicroTCA.3 has gone through the same testing as VPX – in fact, it underwent extra testing in some areas – at the same lab. Table 1 shows a chart of some of the testing.

Table 1: The MTCA connector passed the same testing (in some cases more extensive) for shock/vibration that the VPX connector went through, at the same lab.

The MicroTCA.2 standard – ratified in early 2013 – is similar to MicroTCA.3, except that it has air channels for a hybrid conduction/convection approach. One advantage of MicroTCA is that it is easy to ruggedize standard AMC modules to hardened versions with clamshells. The MTCA.2/.3 designs also provide the ability for Level 2 maintenance, giving at least the same level of ESD protection as VPX.

Price is now a key factor

Sequestration and budget cuts have changed the equation for the technology choices for military and aerospace embedded systems. Price used to be a secondary concern for many applications; today, however, price at a comparable level of performance can push a design decision over the top. From a hardware perspective, MicroTCA systems are typically one-half of the cost (approximately) of comparable VPX systems.

MicroTCA is a true COTS architecture, used in applications from military and aerospace to communications to test and measurement and high-energy physics. VPX could basically be called MOTS (military off-the-shelf), primarily serving one market. COTS architectures have several benefits, including economies of scale, more versatile product offerings, and a position on the leading edge of performance, pushed there by the communications and physics communities.

As many of the modules and infrastructure products can be used across multiple markets, the same item that may be sold in volume to another market can be sold in small quantities to the military market at a competitive price. For example, a multichannel, high-speed A/D converter for a physics application can be tweaked for use in a military/aerospace sensor or in a radar/sonar application.

Throughout VPX’s history, there has been frustration that the specification had interoperability issues. When VPX was started (primarily a concept by one vendor, later broadened to the wider VITA community), it had a very open pinout structure. If designers are dealing with only one vendor, this situation is fine, in that the single vendor will make sure that its boards and backplane are all interoperable. As use widened, however, it didn’t take long for issues to emerge where one vendor’s boards didn’t work with other vendors’. In reaction, OpenVPX was created to define pinout configurations to be interoperable; the problem with this setup was that it was done after the fact. A vendor comes up with a configuration and says to the committee, “This is how you can be interoperable with this board.” Another vendor then has to be willing to design a board to a pinout that works with their competitors’. A few “standard-ish” pinout types have emerged, but OpenVPX is far from a truly open interoperable ecosystem.

With MicroTCA, pinout definitions and rules were implemented upfront when the specification was formed, so that the full ecosystem of vendors’ designs work together. In addition, MicroTCA holds regular interoperability workshops to ensure that next-generation products work with other products. Even though the specification is clear, when dealing with system-management features and high speeds, this effort is still beneficial and prudent.

The MicroTCA architecture is also a key architecture of many communications and high-energy physics applications, which means that the push for cutting-edge design is ongoing. For example, there are currently solutions in the market for 40 GbE (the specification is in draft). The industry’s first 100 G line cards (via the front panel) were introduced in the MicroTCA form factor. Texas Instruments has also used MicroTCA as the architecture for its EVMK2Hx reference design card.

The architecture has also seen many design wins in military and aerospace projects. One project in particular found a prime military contractor choosing MicroTCA for a shipboard system to handle signal processing of sonar data from towed arrays or other sensors on the board. VadaTech developed a 1U solution for vibration and shock resistance in an isolated rack. The application uses a customized FPGA for beamforming.

We have also seen MicroTCA being chosen for a major European radar platform project; a prime contractor using MTCA on many platforms and several that are planned, including hardened versions; a prime contractor announcing that it chose MTCA over VPX on a rugged vehicle platform; MicroTCA being selected in a satellite system by a national lab; NASA selecting it for ground terminals in SGSS project; and the U.S. military choosing it for helicopter radar applications.

Many of the most cutting-edge digitizers/converters, processing solutions, GPGPUs, and storage are being made available in MicroTCA. Figure 2 shows a 40 G MCH with IEEE1588/SyncE/GPS for precision timing.

Figure 2: The 40 G MCH provides GPS/IEEE1588/SyncE for precision timing and time-stamping, a prominent feature in many radar and target-acquisition applications.

Designers looking for a high-performance open standard architecture will find MicroTCA to be an attractive solution. When it comes to SWaP-C, lower costs, higher reliability, cutting-edge designs, and a versatile COTS ecosystem, military and aerospace designers are increasingly moving from VPX to MicroTCA.

Justin Moll is Director of Marketing for VadaTech. With more than 15 years of embedded computing experience, Justin has previously worked in director- and management-level positions for electronics-packaging companies. He has a BS in Business Administration from the University of California, Riverside. Justin is active in the embedded industry and is currently the Chair of the 40 GbE over MicroTCA committee in PICMG. Readers may contact him at [email protected] 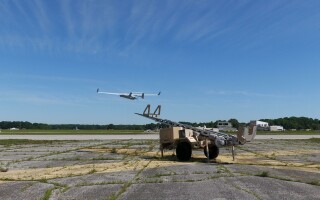