Military-display designers continue to face stringent size, weight, power, and cost (SWaP-C) constraints while integrating commercial innovations like HD – and soon 4K – into systems that must work with legacy sensors and interfaces while also complying with a variety of open architectures and standards. Meanwhile, researchers plan for military augmented reality and immersive display solutions for warfighters.

Today’s military displays – whether designed for avionics, naval, vetronics, or ground-control stations – with their touch screen capability and high-resolution digital graphics, have little in common with their analog forebears, except they must be just as rugged and just as reliable while taking up less room.

To younger warfighters, stories of analog cockpits with their gauges and dials must sound like their grandparents describing rotary phones. Smartphones, touch screens, windows – these are all second nature to the digital natives operating military glass displays in modern cockpits and ground vehicles. But the military still lags behind the ubiquitous personal iPhone or 60-inch 4K smart TV when it comes to capability.

“Most are now switching over to digital systems versus the analog standards such as VGA that many platforms clung to for decades,” says Ross Hudman, sales and marketing manager, Digital Systems Engineering (Scottsdale, Arizona). “Camera manufacturers are developing more and more sensors in HD format and doing so more economically. At first, we only saw the HD sensors in aerospace installations, but recently they’ve crept into land vehicles in HD and HDMI SDI formats.”

Defense integrators are consistent in what they want from displays – “essentially taking the latest advances in commercial technology and delivering them in rugged systems that can survive in harsh battlefield environments,” says Jason Wade, president of ZMicro (San Diego, California). “In these applications, eliminating latency is critical. For example, if an operator using direct vision to drive has latency with the direct vision system, he will feel a bump seconds after the vehicle hits it and be unable to avoid it. Hitting bumps and obstacles like this could cause the operator and passengers to get sick, putting them at risk in a battle.” (See lead image.)

Ruggedizing commercial technology still takes time; while some defense applications such as ground-control station (GCSs)s for unmanned systems take advantage of the high-resolution capability as soon as it’s available, some still choose basic over sophisticated when it comes to display functionality.

Dumb versus smart sounds like a blunt contrast, but it aptly describes the choice integrators make when choosing a rugged military display for their platforms.

Dumb as opposed to smart displays also describes the two main requirement trends designers are seeing from military system integrators. “The first is a demand for low-cost, plug-and-play touch screens with bezel key-control displays,” says Richard Pollard, senior product manager, VMS product line at Curtiss-Wright Defense Solutions (Letchworth, Hertfordshire, U.K.). “These are simple rugged, dumb displays that interface with a mission processor somewhere else. Users get benefits separating the intel from the display from an obsolescence standpoint, so that when processors get upgraded to increase performance, they don’t have to change the entire display.

“The second trend is a demand for a smart display that combines the processor and display in one unit for applications such as 360-degree situational awareness,” he continues. “In the U.S. we see more demand for simple displays that plug and play easily with a separate processor. European applications are still sticking to the smart display approach.” (Figure 1.) 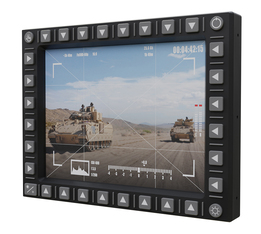 “Customers are matching display requirements to what they need for missions,” says Steve Motter, vice president, Business Development, IEE Inc. (Van Nuys, California). “If all they need is simple information displayed with simple symbology, they will steer clear of super-high-resolution systems. But if the mission requires use of moving maps and integrating video from multiple camera and sensor feeds, they can get a lot of benefit from higher-resolution, smart displays.” (Figure 2.) 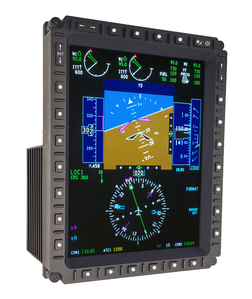 [Figure 2 | The 10.4-inch ARINC-818 Multi-Function Display from IEE, Inc. is a primary flight display in a portrait-oriented 8-inch by 6-inch format; it can display one of two optical-fiber ARINC-818 video sources with or without a computer-generated overlay.]

Human factors – namely, warfighter pref­erences – are also playing a role in display requirements. “Operator interface requirements are trending more and more toward multi-touch solutions with gestures and away from keyboards and mouse interfaces,” Motter says. “Multi-touch solutions make sense in many military and aviation displays from a human-factor perspective. Operators can react more quickly to displays with their gestures or fingers than when operating a keyboard. Touch screens also free up space in cockpits and ground vehicles by eliminating peripheral interfaces. Such ease of use is critical in applications where operators have really high workloads, like in ground vehicles during combat.”

Multi-touch requirements are flavoring every application. “A common trend among Navy shipboard applications, air traffic control for aircraft carriers, tactical vehicle systems, and GCSs is for multi-touch capability,” says Michael McCormick, president and CEO, CP Tech (Prescott, Arizona). “In the GCS market there is demand for rugged portable systems with really good human interfaces without keyboards and game controllers. They want operators to be able to use touch to move screens and windows around. Going forward, I see requirements even moving away from touch screens to point-and-move applications. In other words, the displays use sensors to recognize pointing and moving gestures.”

What isn’t trending in military designs yet is 4K technology. Most smart TVs, computer monitors, and video game consoles used by consumers leverage 4K-resolution screens, which are essentially four times the revolution of high-definition screens. However, while your neighbor gets this definition watching “the big game,” military users have yet to see it on their consoles and designers rarely see it in future system requirements, because sometimes it’s just not necessary.

“The adoption of 4K has gone slower than I initially thought based on how quickly it made its way into consumer market,” Wade says. “That said, there are new programs looking at 4K, and down the road the U.S. Army will likely require 4K ground-vehicle displays where practical. We have multiple customers using 4K including one with multiple video sources coming into a 32-inch 4K monitor that functions like a video wall.”

Yet, 4K requirements are on the way. “I expect to see military adoption of 4K designs in about five years at the earliest,” Hudman says. “DSE has products to support and is looking to integrate a 4K LCDs – including smaller form factors – into the FHDRM product line.” (Figure 4.) 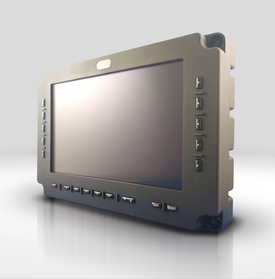 [Figure 4 | The FHDRM Display Series from Digital Systems Engineering is built with a full-HD 1,920 by 1,080 LCD in a mil-spec design with low-power consumption, a high-brightness backlight, and an ultrathin form factor for operations requiring 1080p detail.]

While 4K monitors work well in the average living room, getting them to mesh with older sensor systems in small 10-inch screens in a military ground vehicle can be challenging. “Older legacy systems with 10-inch screens would be an example where it would not be practical as the eye can’t differentiate or tune into that level of pixel detail,” Wade says. “The 15-inch and 17-inch screens seem to be what users desire for 4K, but there is not much room inside these vehicles.”

“There are also upscaling and downscaling challenges with non-4k inputs that can have negative consequences when trying to leverage 4K,” Hudman explains. “If FLIR or L3Harris came out with a 4K camera, but the displays themselves still cannot show 4K resolution, then you have a reverse problem. You’re now removing data and impacting the operational success of that image, as the soldier is not able to take advantage of the 4K sensor.”

4K also makes it harder to maintain low latency. “Implementing 4K gets further complicated as 4K video high-compression requirements increase latency, which means the operator looking at the display cannot get the data in real time, Pollard notes. “Electro-optical (EO) turret providers currently work with 8K sensors, with the resolution squished down to 1080-pixel resolution. If you want true 4K resolution in the display, the sensors will have to go up to 12K.”

Integration and interface challenges for military display designers often comes down to managing the tradeoffs when it comes to stringent size, weight, power, and cost (SWaP-C) requirements.

“Our customers are not just pushing SWaP but SWaP-C,” Wade says. “Cost was always a factor, but now it is a primary design factor. With cost driving decisions, managing the tradeoffs for cost versus power versus ruggedization can become more complicated.”

Often it’s “not so much about reduced size or weight, but about how you customize display mounts or consider changing mounts to footprints or envelopes for unique installation locations and reconfiguring enclosures,” Hudman says.

“Such integration problems have grown more complex as tactical vehicles now have 360-degree camera systems around them and the displays must be adaptable for multiple inputs,” McCormick says. “How we manage these challenges depends on what the customer wants in a display – from sensor feeds to camera feeds to other data inputs. As rugged display designers we need to understand how to interface between the computer and the display as well as with whatever technologies coexist off payloads and cameras and sensors.”

All-in-one systems also help reduce the SWaP footprint of displays, he continues: “For reduced SWaP requirements, we will build the computer and display in one system. Along these lines, we are also seeing external power supplies being eliminated and having the display and computer leverage the same power supply. The challenge then becomes heat dissipation, especially when operating at test ranges where the temperatures reach 100 degrees.”

Maintaining equilibrium with conflicting requirements is complex. “We tend to think of SWaP-C almost as a fine balancing act depending on requirements,” Pollard says. “A ground-vehicle customer may put more emphasis on cost versus resolution for a small display. Yet another may want the smarter display features and will be fine with higher-cost software in that version. Meeting SWaP requirements always comes with tradeoffs, but when you factor in the cost element other requirements may get relaxed.

“As you add in more cameras with more bandwidth and higher resolutions (4K), the recording challenges become complex, as you have to compress the video once it’s on a network,” Pollard continues. “Latency and resolution quality will be impacted. Once again, it’s a balancing act, a three-legged stool. One leg is cost, one is image quality, and the third is latency. You can’t change one without changing the others or the stool tips over, so designers must find a balance.”

Open architectures enable efficient technology refreshes but also add to the interface challenges. “Whether we are developing display systems for the Israeli Ministry of Defense or for U.S. ground tactical vehicles, we have to be mindful whether the display will interface with myriad external and internal systems and components all based on different open architectures and standards,” McCormick says. “Often, it is like putting a square peg in a round hole.” 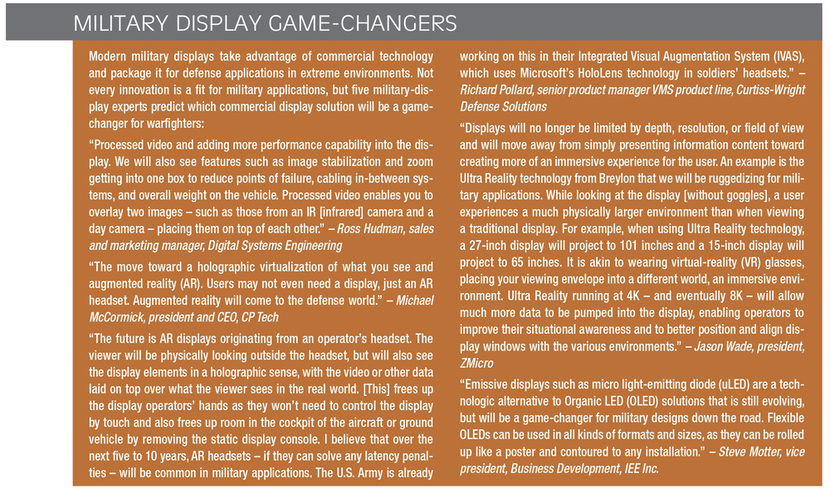