The modern battlespace has changed over the past decade, and the military use of GPS to deliver critical positioning, navigation, and timing (PNT) information to warfighters faces challenges from adversaries’ threat systems. GPS continues to be relevant for the U.S. military and its allies, even when used in a GPS-denied environment. Existing and future military GPS solutions must especially consider those uses designed for handheld and ultrasmall applications where size, weight, power, and cost (SWaP-C) are all key considerations.

The military threat environment has changed, with the return of peer-state competitors as either adversaries or threat system providers to adversaries. Based on the challenges posed by peer threat systems to the precision absolute PNT [positioning, navigation, and timing] provided by GPS, the U.S. military and its allies have largely defined the problem as “GPS-denied,” and focused on development of non-GPS solutions. A detailed analysis, however, provides a different picture that lends itself to more straightforward solutions.

GPS was a part of the U.S. Department of Defense (DoD) “Second Offset” strategy, and provides precision absolute PNT, as distinct from nonprecision or relative PNT (Figure 1). 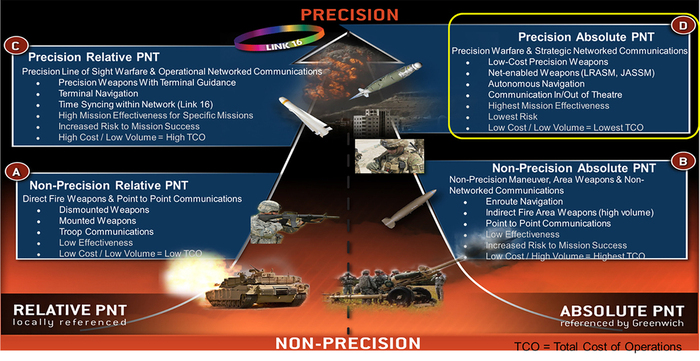 “Precision” PNT is usually defined within the defense industry as less than 10 meters for positioning applications and less than 1 millisecond for communications applications. “Absolute” PNT is defined as using the World Geodetic Survey 1984 (WGS84) reference frame and Coordinated Universal Time (UTC). Using the absolute reference frame, the Second Offset enabled low-cost precision weapons, an improved ability to deliver mass effects from dispersed forces, improved mission effectiveness, and reduced risk – all of which provided for the lowest total cost of operations.

The scope of the threat

While several organizations have attempted to construct a framework through which to understand the problem, a model has in fact been proposed to clearly identify the challenge to absolute precision PNT (Figure 2).

In this model, there are key characteristics that define the threats to GPS: threat level, threat cause, threat duration, and threat reach. In analyzing the challenge to assured PNT, it becomes clear that it is not a binary “permissive” or so-called Day without Space problem. Rather, there are combinations of the four key characteristics that result in conditions of GPS being available, GPS being unavailable locally or regionally, and GPS being unavailable globally. For purposes of this framework, “short” is defined as a time or distance that can be dead-reckoned through with a high-stability clock or inertial capabilities, “local” is an area affecting a small force, and “regional” is a substantial portion of a military theater.

The causes of a GPS-based PNT outage are jamming, spoofing, obstruction, or a systemic outage. Jamming is the deliberate or incidental impact of radio frequency (RF) energy on the ability of a GPS receiver to receive and decode the signals from a GPS constellation, while spoofing is a more sophisticated and deliberate effort to corrupt the data in the GPS signal. Obstruction is a passive cause – a physical object like a cave, building, multilayered foliage, or even a mountain shadow – that blocks the RF energy of the GPS signal and prevents sufficient energy from reaching the antenna for the receiver to acquire and track the signal. A systemic outage could theoretically be caused by corruption of the ground-control segment or by damaging a sufficient number of the satellites on orbit, which is unlikely to occur (see the RAND Corporation report, “Analyzing a More Resilient National Positioning, Navigation, and Timing Capability,” available at https://www.rand.org/pubs/research_reports/RR2970.html.)

When thus logically decomposed, solutions present themselves to solve the distinct problems of each column and/or group, as seen in Figure 3.

[Figure 3 | Affordable solutions exist for many of the GPS threat conditions.]

Seen in Figure 3 is the threat framework from Figure 2 with possible technologies to address the threats presented on the left, which range from hardening GPS with antijamming and antispoofing technologies to augmenting GPS with dead-reckoning in the form of inertials and/or high-stability clocks, other available satellite navigation systems, vision pedometry, terrain matching, celestial, and so on. Solutions exist today to counteract the most likely threats to GPS – those in columns 1-5.

The first and most important mitigation is to key the receiver so that it can receive and process encrypted GPS signals – it is surprising how often military GPS is rendered ineffective due to not keying the crypto. To defend against peer competitor-grade threat systems, it is highly advisable to use modernized GPS equipment keyed with Military Code (M-Code) cryptography to enable the user equipment to receive the more powerful signal (~3dB nominal or 2x, depending on the satellite – GPS IIR-M, IIF, or III) and defend against more sophisticated spoofing. Modernized GPS receivers are available to support even handheld and ultrasmall applications where size, weight, power, and cost (SWaP-C) are all key considerations.

Above and beyond the antijamming capabilities of M-Code alone, BAE Systems has digital antijamming equipment available that can provide more than a 220-time (1 million-fold) increase in jamming immunity and an antispoofing technology that reliably detects the spoofer and eliminates it from the PNT solution. This equipment works with both legacy Selective Availability/Anti-Spoofing Module (SAASM) and Modernized user equipment and is available for airborne, shipborne, and ground vehicles. With the exception of obstructed signals such as caves – no GPS system can provide PNT in the absence of a GPS signal – GPS-based solutions exist today for columns 1-5. With the addition, where CONOPS dictate, of dead-reckoning systems (i.e., inertials and/or high-stability clocks), there is no GPS-denied environment while there exists a signal in space.

Global outage; or, a Day Without Space

In the highly unlikely event of a long global GPS outage (a corruption of the control segment or loss of multiple satellites), the U.S. is pursuing a next-generation modernized receiver capability that will process signals from allied GNSS systems. This move is intended to address the long-term global GPS outage possibility.

In the final analysis, what many in the defense industry have been calling GPS-denied is really the Day Without Space scenario. The second half of the binary choice mentioned previously (i.e., no signals at all) proves to really be the extreme end of a much more solvable spectrum. The military threat environment has evolved, and peer-state-level PNT threat systems threaten the U.S. military’s ability to conduct high-tempo combat operations in the place and manner of its choosing. However, the problem to be solved is not “GPS versus GPS-denied” with the challenge to invent, field, and operate an alternative to GPS. GPS continues to be the most ubiquitous, precise, and inexpensive source of PNT. Solutions exist today – even for the most SWaP-limited platforms – to harden and augment systems to defeat all but the most unlikely threat scenarios.

Justin Wymore is the customer requirements manager for Weapons Position, Navigation, and Timing at BAE Systems, and a retired U.S. Air Force Lt. Col. Readers may reach the author at [email protected].