LONDON. Industry analysts at Frost & Sullivan predict that the small-satellite launch market could total or surpass the $62 billion mark by 2030, according to a new report titled "Small-satellite Launch Services Market, Quarterly Update Q1 2018, Forecast to 2030."

In the report, the industry experts detail the evolution of small satellites from technology demonstrators to providers of low-cost operational services across distributed industry segments, which is attracting mounting demand for launches from organizations across the globe. The analysts predict that by 2030, there will be an estimated 11,631 launch demands for both new constellation installations and replacement missions. Moreover, because the lifespan of these satellites is between two years and five years, there will be constant launch demand and participants will seek to enhance their systems and infrastructure, which drives and continues demand.

Additional findings in the report: Small satellites in the mass segments of 0 to 15 kg (approximately 33 pounds) and 150 to 500 kg (approximately 33- to 1102 pounds) could account for as much as 65 percent of the small-satellite launch demand during the forecast period. Additionally, the report states that 32 small-satellite commercial operators will generate more than 90 percent of the launch demand. 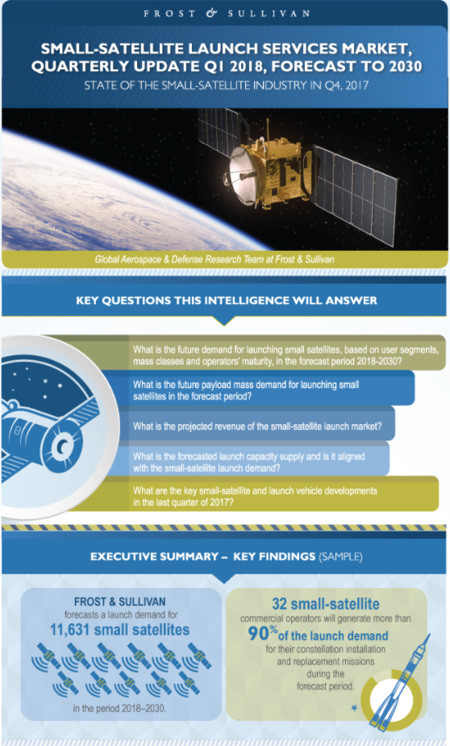