Radio frequency (RF) and microwave technology used in the military is ever-evolving and necessarily acclimating to the congested digital battlefield. These solutions need to be fluent in the language of electronic warfare (EW). Demands for multifunctionality, digitization, and increased sensitivity are pushing designers to add these capabilities that warfighters require when translating electronic noise into actionable information.

When the military mission calls for gathering and interpreting signals, war­fighters are only as smart as their machines. Twenty-first century combat frequently occurs in a command center, ground-control station, or behind a screen just as often as it does on a physical battleground, making it paramount that the U.S. military be equipped with robust radio frequency (RF) and microwave solutions.

Radars that can see ahead farther than a human ever could and electronic warfare (EW) systems that can intelligently and efficiently jam or spoof an incoming threat are critical to maintaining superiority over the electromagnetic spectrum (EMS). Companies that engineer electronics for these domains are making strides in RF and microwave innovation to better position U.S. armed forces against digital threats.

It comes down to a matter of dynamic range, or what can be described as the ability to see and decipher smaller perhaps more significant signals while in the presence of larger ones. In theaters of war, where both allies and adversaries are always emitting electromagnetic noise, it becomes critical that radar and EW capabilities can quickly decipher whether the interference is friendly or threatening.

While much of a system’s architecture depends on mission requirements, industry officials are touting methodologies like direct digitization as an enabler for size, weight, power, and cost (SWaP-C) optimization; cognitive EW; and modified commercial off-the-shelf (COTS) reuse as promising advancements for RF and microwave technology.

When comparing the requirements for a radar or EW system, military electronics manufacturers use overall mission architecture to aid in deciding whether a COTS-based product should be used in place of a fully custom capability. With RF and microwave, ensuring that the products are operating on military frequencies is critical.

Mitchell goes on to assert that it is this fact that makes modified COTS reuse so pivotal, thereby inspiring U.S. Department of Defense (DoD)-led efforts to push for commercial investment in new technologies such as direct digitization and distributed processing architectures. However, it remains important to consider similarities and differences in radar and EW applications.

“By and large, noise has the same effect in both types of applications,” says Chuck Davis, director of sales and business development for the Crane Aerospace and Electronics microwave group (Chandler, Arizona). “EW systems have to operate over a much wider frequency range than radar systems. So, additional challenges and complexities are added to the requirements for an EW system. They have to have multiple channels and an ability to discern a valid signal from an interfering signal.”

Even with RF and microwave system design being heavily dictated by the needs of the end user, manufacturers are still supporting standard form factors in RF and microwave electronics design. Interoperability is a widely held DoD goal, especially when operating on the spectrum, and radar and EW commonalities are helping to ease the design process.

“Requirements are converging,” Mitchell says. “Radar systems have traditionally been used for detection, tracking, and target identification. Active electronically steered arrays (AESA) are phased-array antennas which enable the radio waves to be steered and pointed in different directions without moving the antenna, which allows for the design and implementation of smaller apertures. Modern radar systems combine transmit and receive functions which enables them to be more agile and to perform both traditional radar and EW functions.”

The trajectory of RF and microwave technology is projected to become far more symbiotic than it has been in the past, with radar and EW operationalities growing more integrated and digitized with each advancement. As RF and microwave capabilities are pushed further into the digital realm, however, it’s necessary to note that it will come at a cost.

SWaP-C optimization, with an emphasis on “C”

“We’re seeing reduced SWaP trends all of the time as we encounter new opportunities to propose and participate,” Davis says. “One of the technologies that we’re employing in some of our integrated assemblies is what we call our Multi-Mix technology (Figure 2). That’s an integrated RF and microwave technology that allows for stacking of electronic features within a circuit board, so that allows you to occupy less surface area within a configuration. We also have specialized heat-removal technology that we can build into that approach to continue to enhance that small packaging and those dimensions.” 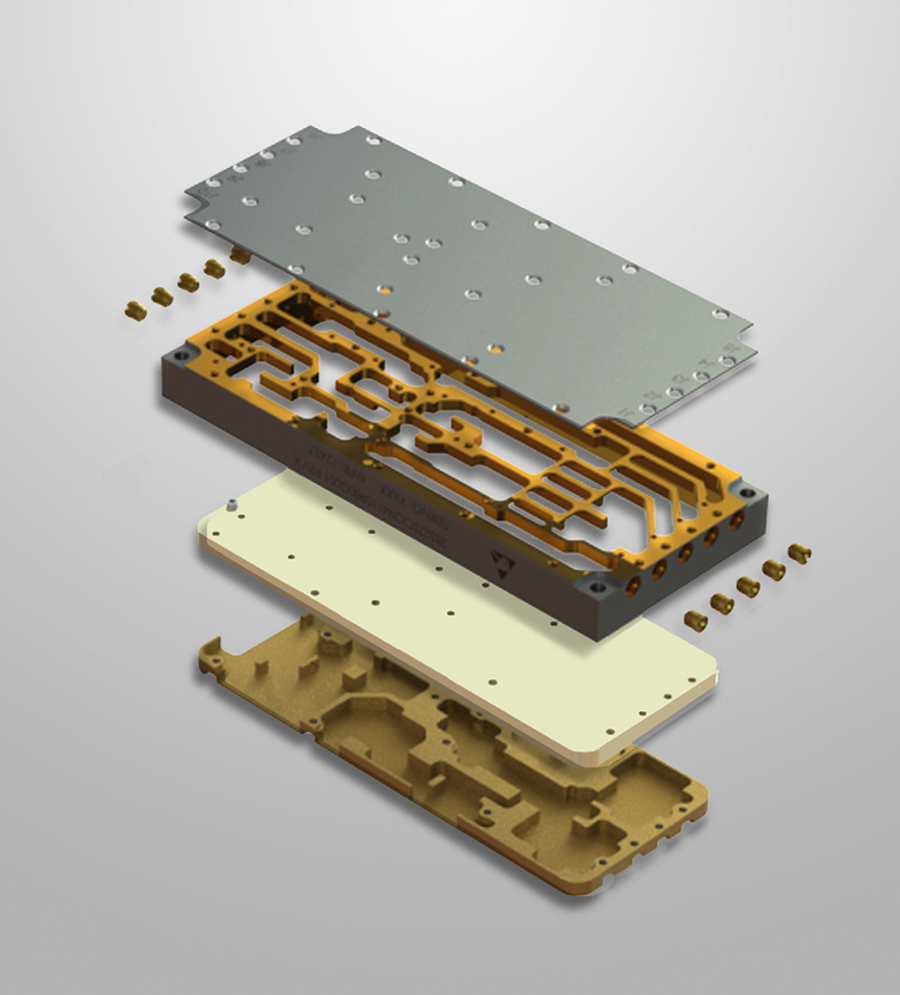 [Figure 2 | Crane Aerospace and Electronics image depicting the company’s RF converter miniaturization using its Multi-Mix technology that features a miniature footprint but is flexible and high-performance.]

Davis also adds that Crane is utilizing both low-noise technology and high levels of integration in hopes of delivering complex systems in small spaces to fit existing platforms. With this methodology, larger numbers of capability could be deployed in a small space. Concurrently, digitization efforts are producing different kinds of power challenges.

“We’re making the RF section simpler, but we’re making the digital signal processing and the power burn a problem,” says Benjamin Annino, systems and applications director of aerospace, defense, and RF products for Analog Devices (Wilmington, Massachusetts). “That’s a challenge we need to overcome. When you look at a complete radar and EW signal chain, you have bottlenecks. From a power standpoint and size standpoint, the FPGA tends to be a major offender.”

High-performance FPGAs skew on the larger side and consume a significant amount of a system’s power budget, so manufactures like Analog Devices are looking at ways to pull the digital signal processing away from the FPGA and onto high-speed data converters to better realize the power benefits. But powerful and small also often means cost pressure.

“In the SWaP-C conversation, cost is often forgotten,” says Mitchell. “But in certain systems, smaller SWaP-C drives cost up. Keeping cost down, while designing and manufacturing for smaller scale systems and components, is a challenge being attacked by advanced packaging techniques. RF MMICs [monolithic microwave integrated circuits] are becoming commonplace in military radar and EW systems.”

Manufacturers have also been trying to address RF and microwave SWaP concerns by pushing electronics closer to the antenna. In these scenarios, power and cooling capabilities can vary depending on the platform.

“One of the things that I’d say has pivoted over the last decade is the amount of electronics that are now getting very close to the aperture,” says Bill Conley, chief technology officer for Mercury Systems (Andover, Massachusetts). “And it’s one thing when you’re at the center fuselage of an aircraft or you’re below deck in a ship, you generally have a lot of power, and you have a lot of cooling available to you. Certainly not infinite, but substantial in comparison the environment that you’re operating in. When you’re out right next to the aperture is much more challenging from a SWaP-C standpoint, so the thermal side is critical.” (Figure 3.) 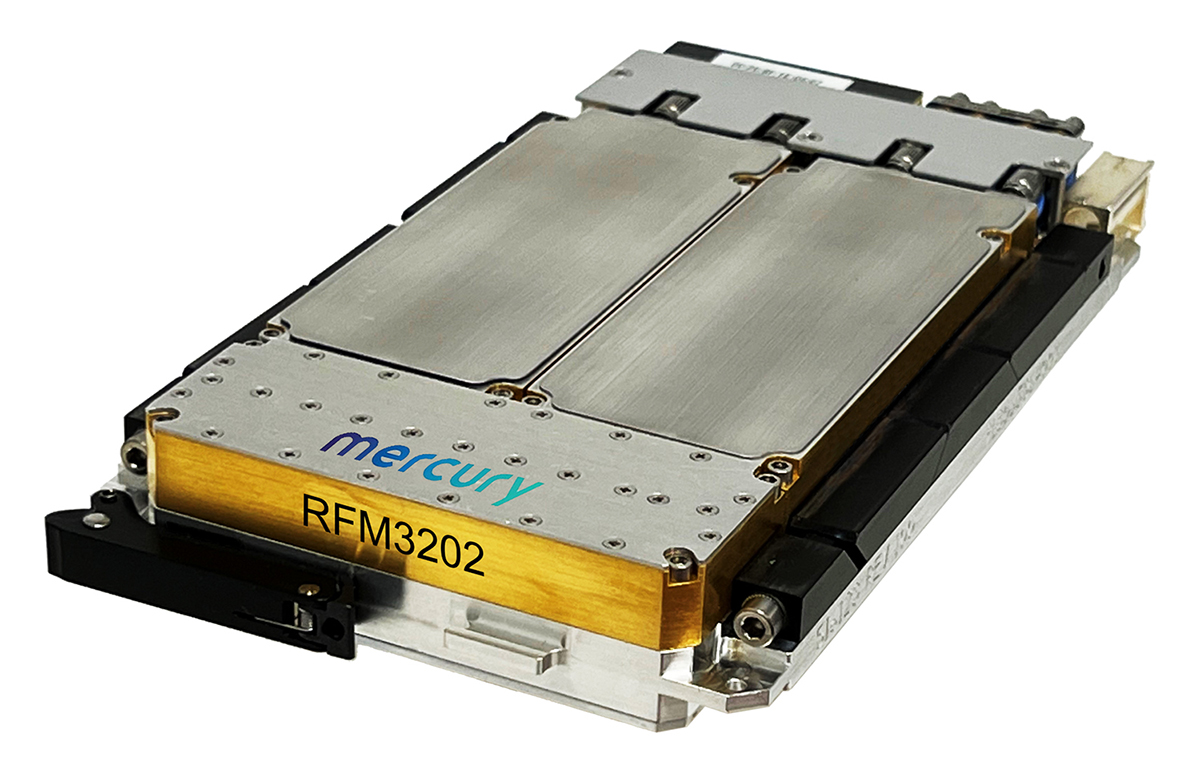 The emergence of DoD cross-domain programs like Joint All-Domain Command and Control (JADC2) makes addressing these SWaP concerns paramount. The sheer amount of radar and EW systems that is soon set to operate on the EMS will ask a lot of RF and microwave electronics.

RF and microwave in a joint domain

While standardization and DoD goals surrounding common architectures and components across the EMS are predicted to aid in joint-domain programs, electronics companies are also putting their money on establishing better control over waveforms.

“We are involved in the EW side in building systems that help to jam and increase the noise in the environment,” Conley says. “In the case of JADC2 – a fully networked force – what that also means is that we’re going to have a variety of networks and a variety of sensors that will be soaking up all this energy in and through the EMS, so we have to make sure we don’t put bad data in front of one of our own commanders.” (Figure 4.)

Wideband is predicted to be a significant facilitator in multidomain operations, considering the multitude of waveforms that require collecting so the warfighter can then more effectively engage in the observe, orient, decide, and act (OODA) loop.

“There’s a desire to take dedicated systems that were federated but responsible for one function in the system and converging them into a single platform,” Annino says. “The wideband RF allows you to do multiband systems, so maybe instead of having a dedicated C-band radar, you could have a radar capable of L, S, C, X-band all in a single platform, and the RF would be capable of that. That allows for cross-domain compatibility.”

From a digital standpoint, Annino touts wideband data converters. Industry is looking at such solutions to enable simultaneous observation of multiple frequency channels that may all be doing something different on the EMS. The ability to split up an other­wise busy spectrum and process it for separate functions could be key in enabling multidomain efforts.

“You need the ability to be able to give an adversary something that causes them to pause or to make bad decisions because what they are observing and how they think something is going to happen turns out to be incorrect,” Conley says. “If we then ask what technology would be required to do that, we have to acknowledge that no one in modern combat has only one single sensor. There are multiple radars, cameras, and infrared systems that will make it a multidomain fight in some shape or form. With that in mind, how do you solve not just one problem but multiple at the same time?”

The answer may be artificial intelligence (AI). While wideband RF and microwave technologies could enable streamlined multidomain access to EMS data, managing and optimizing newfound resources becomes an entirely different challenge that AI and machine learning (ML) has the potential to address.

Efficiently and accurately executing tasks that may be cumbersome or strenuous on a human operator is what AI and ML algorithms do best. In the radar and EW arenas, AI is positioned as an enabler for timely access to actionable information.

“AI plays a role in many applications, including cognitive EW,” Mitchell says. “CAES has developed several AI algorithms for inferencing and sensor fusion. Cognitive EW must be able to react to threats in real time without reliance on database look-up tables. The cognitive EW system must learn during the mission and react appropriately. Progress is being made, and we see AI enabling quick decision-making on the battlefield, which will be critical in future conflicts.”

What stands in the way isn’t lack of funding or technological hindrances, but rather building trust between human and machine. Once the RF and microwave data has been observed, analyzed, and put in front of the warfighter, how will the ethics be established for the decisions that follow?

“The challenge with the EMS is that there are all of those different signals out there,” Conley says. “Finding a needle in a haystack isn’t that hard if you give me a metal detector but finding a specific needle in a pile of needles is not an easy feat. That’s what we’re asking of our EW systems today. With that in mind, anything you can do that automates that signal processing very quickly can help you identify when something is behaving in a threatening way.”