Unlike those used in manned spaceflight platforms of the past, the avionics and other electronics used in NASA's Orion spacecraft are driven mostly by software and commercial processor technology ruggedized and radiation-hardened to endure extreme radiation and temperature fluctuations. Orion's updated avionics also can handle the severe acoustic and vibration environments associated with launch, orbit, a fiery reentry, and a saltwater landing.

The Orion spacecraft, named after the constellation it resembles, is ushering in a new era of human space exploration. NASA aims to use Orion to transport humans to an asteroid by 2025, and then to Mars in the 2030s.

While Orion is similar in shape and size to its Apollo-era predecessors, its avionics design, technology, and capability are light-years beyond those early platforms as well as the space shuttle fleet that Orion will be replacing.

During development and production, NASA's Orion avionics team faced numerous design challenges, including building a spacecraft that would be exposed to an extremely inhospitable deep-space radiation environment, as it would be flying through the Van Allen belts (see sidebar). These efforts culminated late last year, when Orion's avionics capabilities were demonstrated during its first flight test (EFT-1), where the spacecraft was equipped with 1,200 sensors for a two-orbit flight that lasted 4.5 hours.

"Redundant components are provided for the majority of subsystems," says Paul Anderson, Orion avionics director for Lockheed Martin. "The overall hardware and software integration of Orion's avionics and network system represented a significant technical challenge." The success of the "avionics, software system, and subsequent EFT-1 flight can be attributed to the tremendous amount of integration and testing that was performed in multiple development labs," Anderson says. "This team included numerous NASA and industry partners located across the U.S." (See Figure 1.)

Figure 1: Spacesuited engineers demonstrate how four crew members would be arranged for launch inside the Orion spacecraft, using a mockup of the vehicle at Johnson Space Center. (Photo credit: NASA/Robert Markowitz.)

For EFT-1, Orion relied on two flight computers. For its next flight, which is slated for 21 days, the vehicle will have four flight computers aboard – all built by Honeywell Aerospace engineers and powered by the IBM PowerPC 750 FX processor chip, which was introduced more than a decade ago, in 2002.

Interestingly, "all four flight computers ‘think' they're flying the vehicle," says Matthew Lemke, Orion's manager of avionics, power, and wiring for NASA; Lemke is essentially responsible for almost everything that generates or uses electrons on the spacecraft. "It's not like the shuttle, which used four computers that all voted on the output and had to be in agreement to fly the vehicle. In this case, each computer thinks it's in charge of the vehicle, independently, sending commands. Our power and data units (PDUs) have a priority table that says ‘If I get a command from Computer 1, I'm going to use it. If for some reason it's not there, I'll use Computer 2.' This is much different than programs that rely on a voting architecture."

"The flight computers are a derivative of the computer Honeywell built for the Boeing 787," Lemke says. "We took their commercial processors and ruggedized them for the environment of space, but the basic architecture is the same."

This computer is an example of commercial off-the-shelf (COTS) use in Orion, Anderson points out. This approach "is based on a commercial aircraft computer architecture that incorporates a 750FX microprocessor," Anderson adds. COTS technologies are playing "a selective but critical role throughout Orion," he notes.

The reason for this approach: COTS parts can provide affordable design alternatives through shorter development schedules at a much lower cost than fully qualified components. "Wherever possible, we try to leverage what's available commercially or from defense to help reduce our costs," Lemke says.

COTS or not, before any components can be used on Orion, they must first undergo an extensive program that includes "radiation screening, vibration and shock testing, thermal vacuum testing, and electromagnetic compatibility," he notes.

How important is software to Orion? "It's everything," Lemke says. "Think back to Apollo: every system from propulsion to life support to displays to power – each was a self-contained system, run with something very simple to control."

Now, on Orion, NASA engineers use flight computers and "boxes called PDUs, and everything on the vehicle connects in via the PDUs to the flight computers," Lemke elaborates. "Very little isn't under computer control. We have few switches – in the neighborhood of 40 on the vehicle total – compared with an airline or even the shuttle cockpit with all the switches."

Orion uses a Federal Aviation Administration (FAA)-certified operating system for multitasking and high criticality applications. This is to ensure that "one part of the software can't affect another part of the software. The whole goal is reliability," Lemke says.

For its data network, NASA experts are leveraging 1 GB/s time-triggered Gigabit Ethernet (TTGbE) network, which was developed by Austrian company TTTech, who worked with Honeywell to build the system commercially. Lockheed Martin and NASA then joined in to make it work for Orion.

It's essentially standard Ethernet, but with protocols layered on top to guarantee timing and delivery. The system is designed "to run all of our data over three separate links so that if any of the network switches or cables or anything else experiences a problem…as long as one of those three get across, the data is all there and it will work fine," Lemke points out. That's a level of redundancy you don't normally find in networks.

"In space, we want to know if the computer issues a command to a thruster and that it really happens right then and has the highest priority," Lemke adds. "So in TTGbE, we guarantee commands get across and data goes exactly when it should. Then, with functions like video or audio, it fills in the free time on the data network. It's ‘best-effort traffic,' which is guaranteed delivery." The TTGbE technology has now become an industry standard – SAE AS6802 – and "hopefully others will begin using it as well," he says.

Orion's flight computers, software, and data network all did their job during the launch and flight in orbit, but NASA also wanted to make sure the electronics survived the splashdown. Upon returning from space, Orion makes saltwater landings with the help of specially designed parachutes to slow its descent, so the avionics design team had yet another extreme environment to factor in. To handle it, "all of our connectors and harnesses or enclosures are designed to be able to handle immersion in saltwater," Lemke notes.

Orion's next flight will involve a journey beyond the orbit of the moon, with the goal of getting NASA within one step of being able to fly humans to an asteroid or Mars.

"Our EFT-1 test flight was a big flight to prove out our heat shield and parachutes and that all of it would work during the mission – our highest risk areas," Lemke says. "This next flight is to test out all of the other systems on the vehicle to ensure it's one step away from putting an astronaut on it." Now NASA will start putting on all of the systems that may not have been on the first vehicle.

"In terms of avionics, we're so excited that NASA had a successful first launch and we're now able to move toward getting people into space," says Lemke. "We're shooting for our next flight to be at the end of 2018, using the Space Launch System being built at the Marshall Space Flight Center." 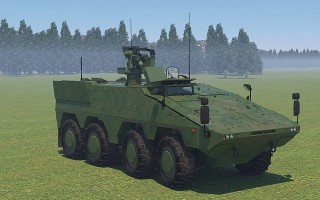