The Defense Logistics Agency (DLA) caused quite a stir among authorized integrated circuit (IC) suppliers and original component manufacturers (OCMs) in 2013 when - in an effort to mitigate counterfeits - it essentially required them to mark their Federal Supply Class (FSC) 5962 IC parts with plant deoxyribonucleic acid (DNA) to tag them as authentic. I wrote about the controversy in this space in our December issue with a column titled: "DNA marking for counterfeit parts: problem solver or money pit," that had comments from the DLA and from authorized suppliers affected by the mandate.

The Defense Logistics Agency (DLA) caused quite a stir among authorized integrated circuit (IC) suppliers and original component manufacturers (OCMs) in 2013 when – in an effort to mitigate counterfeits – it essentially required them to mark their Federal Supply Class (FSC) 5962 IC parts with plant deoxyribonucleic acid (DNA) to tag them as authentic. I wrote about the controversy in this space in our December issue with a column titled: “DNA marking for counterfeit parts: problem solver or money pit,” that had comments from the DLA and from authorized suppliers affected by the mandate.

Since that time, DLA has stopped requiring the authorized suppliers to mark their parts with the stamp from Applied DNA Sciences in Stony Brook, New York, and are now doing all DNA marking themselves at their facility in Columbus, Ohio. According to Applied DNA Science’s website, the facility opened in December of 2014, “with all new orders for microcircuits flowing directly to the DLA lab.”

Despite the change, the authorized suppliers are still adamant that the DNA marking is a big waste of taxpayer money that was implemented just so the DLA could save money by going through brokers, which they claim actually increases the risk of counterfeit parts getting into the DLA supply chain. As I wrote then, accusations of wasteful spending in an era of budget cuts are worth a closer look.

“There is no longer any requirement for the OCMs to spend money foolishly to mark parts which are not counterfeit, it has reduced the part cost to DLA significantly, and has also reduced the lead time for the parts, all good things for the warfighter and the taxpayer,” Lee Mathiesen, Operations Manager at Lansdale Semiconductor in Phoenix, Arizona, told me. “Currently, it appears that DLA is doing DNA marking internally for all 5962 product they procure, but by removing the product from the individual packaging when it has been procured from the authorized chain, it is not value added. They already know the product is not counterfeit; all they are accomplishing is inducing another handling point, which induces failures.”

Essentially, what DLA does is bring “the product in, remove it from its individual device packaging, do some validation testing, and place DNA marks of the product,” Mathiesen added. “I believe most manufacturers will not warrant the product with a DNA mark just because the product is no longer in the ‘as-shipped’ condition – it has been altered.”

Dan Deisz, Director of Design and Technology at Rochester Electronics in Newburyport, Massachusetts, has a similar take: “What simultaneously happened was that all the authorized suppliers backed out because they said they wouldn’t use the DNA marking and brokers recognized an opportunity to be in a sole-source position where they could increase prices with the DLA. In six quarters after mandating DNA marking, their costs doubled for FSC 5962 product, as they flipped from buying 80 percent of the 5962 products from authorized suppliers to buying 80 percent of the same products from brokers. They are now unwinding that. However, it’s a slow switchback due to various purchase agreements and red tape.”

It’s also backing off what they told me – back in 2013 – was the main reason for using the DNA marking: DLA spokeswoman Michelle McCaskill said then that “DLA believes the costs will decrease over time and be relatively insignificant as greater adoption of the technology and increased competition occurs.”

The unwinding of the broker approach seems to show that the increased competition did not mitigate the associated risk. “Some prime contractors and government program managers will not take product from DLA any more because they don’t trust the parts they are getting,” Deisz says.

During my conversations with the folks at Applied DNA Sciences, they made it clear that their technology does not stop counterfeits, but merely is a traceability tool. However, the authorized suppliers say that it falls short in that regard as well.

“DLA puts the same DNA mark on all products, whether received from the OCM or a Qualified Suppliers List of Distributors (QSLD) broker,” Mathiesen says. “They claim they do this so they have traceability to the product. So if the parts all get the same DNA mark no matter where or when it was procured, how does this make the parts traceable? Authenticity does not equal quality or reliability; every manufacturer has authentic product in their scrap bins that do not meet the quality or reliability that they advertise for their products.

“I don’t blame Applied DNA Sciences for this,” Mathiesen continues. “It is the irresponsible implementation on the part of DLA. DNA marking has been and continues to be a waste of taxpayer money. If you put out an irrational directive, and all of your authorized suppliers say ‘no thank you, we choose not to do business with you,’ shouldn’t you look at your directive and the unintended consequences?” 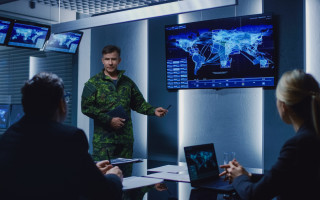