Ruggedized MicroTCA gears up for deployment

Over the past two years, many things have changed: The United States has a new administration in the White House, a global economic crisis is underway, and the needs and desires of the embedded computing marketplace have evolved accordingly. And all of these factors are interrelated when it comes to the growing government and military interest in smaller form factors like MicroTCA.

Lower costs and more scalable designs have lofted MicroTCA to a position of interest among some of the world’s leading technology transfer laboratories. Their interest includes both benign and rugged applications. In fact, some early adopters are already using ruggedized MicroTCA systems for proof of concept development and early field trials in net-centric communications and C4ISR rugged applications. Given the fact that the three largest military programs associated with the Navy, Marines, and Air Force these days are network-centric open system platforms, it is no wonder that many in the industry are focused on this technology.

Many programs require extensive built-in-test. Because existing rugged system architectures such as VPX, VXS, and VME do not currently support an open multivendor built-in-test capability, customers are locked into a single vendor’s proprietary solution, or they need to customize the COTS products. MicroTCA’s robust system management architecture inherently supports open multivendor built-in-test capabilities out-of-the-box, which is a significant customer benefit.

Meanwhile, many rugged network-centric applications require small form factors for applications that are tightly constrained by size, weight, and power. MicroTCA is very attractive for these applications because of its small size, light weight, and low power.

The PICMG MicroTCA.1 draft specification is in the final stages of approval; this specification addresses a first level of ruggedization for air-cooled applications based on existing MicroTCA.0 and Advanced Mezzanine Card (AdvancedMC or AMC). MicroTCA.1 also includes provisions for rear I/O connections. Table 1 shows ruggedization levels for MicroTCA.1.

Release of the PICMG MicroTCA.1 specification is expected early in the second quarter of 2009, as this article goes to press. This specification will enable AMC and MicroTCA suppliers to provide interoperable ruggedized products and technologies for extended temperature and mobile applications in industrial, outside plant telecom, and aerospace environments. Although not specifically targeting military applications, MicroTCA.1 products meeting XT1 and XR2 ruggedization levels are suitable for military applications where many rugged air-cooled VME64x and CompactPCI products are used today.

Work will begin in earnest on the PICMG MicroTCA.2 specification once the MicroTCA.1 specification is released. MicroTCA.2 is aimed at providing more rugged two-level maintenance modules (with full ESD covers) based on ANSI/VITA 47 environmental classes, targeting rugged military air-cooled applications.

Work is well underway on the PICMG MicroTCA.3 specification’s development. Environmental specifications target the conduction-cooled levels found in ANSI/VITA 46 (VPX). A few of the key criteria are included in Table 2.

MicroTCA.3 adds conduction-cooled “clamshells” around existing MicroTCA and AMC printed circuit modules. To provide space for the thermally conductive clamshells and wedgelocks, the conduction-cooled modules grow about 20 mm as compared to the single- and double-width AMC and MicroTCA.0 module sizes.

The MicroTCA.3 3D mechanical models, tolerance analyses, and drawings are already completed, so the most significant work remaining is the planned extensive environmental testing of the conduction-cooled modules and connectors.

The proof is in the test

Testing on MicroTCA.1 and MicroTCA.3 has already begun, and results are publicly available on PICMG’s website at www.picmg.org. More testing is also in the works.

Air-cooled MicroTCA.1 shock and vibration testing has been performed by Harting and Schroff. This testing shows that:

Conduction-cooled MicroTCA.3 shock and vibration testing has been performed by Harting. This testing indicates:

There is some concern regarding the AMC edge finger connector reliability in rugged air-cooled or conduction-cooled applications. Testing performed to date has been very encouraging, but a thorough environmental test report is needed to overcome these concerns.

PICMG has contracted with Contech to finalize the test procedure for conduction-cooled MicroTCA module and connector testing. An extensive suite of environmental tests, patterned after the work that Contech performed for VITA 46 modules and connectors, will be conducted. (VITA 46 test report results are available at www.vita.com.)

This planned environmental testing will provide a solid baseline for using MicroTCA in rugged applications.

In our current economic climate, many applications will be expected to decrease in cost yet provide new capabilities. MicroTCA, with its commercially based roots, is well positioned for design wins in network-centric rugged applications.

It has taken a while for the industry to get to this point. Now that the PICMG Rugged MicroTCA.1 specification is soon slated for release, suppliers can move ahead with rugged and extended temperature roadmaps. The promise of rugged MicroTCA will only be realized if MicroTCA product suppliers move quickly to offer rugged and extended temperature versions of their products. Emerson and Hybricon are committed to this effort.

Bob Sullivan is vice president of technology at Hybricon, where he is responsible for keeping abreast of industry technology trends, setting technical direction for the company, and defining technical approaches to solve challenging problems for key customers. He is active on both the VITA/VSO and PICMG technical standards committees. Recently, he served as cochair and draft editor for the MicroTCA Ruggedization SIG, and he is currently secretary of the MicroTCA.3 committee. He can be contacted at [email protected].

James Doyle is the congressional affairs liaison and director of strategic business for military, aviation, and government for the Embedded Computing business of Emerson Network Power. His current role requires daily interaction with the U.S. Congress and Senate, in addition to interacting with leaders in the Department of Defense, Homeland Security, and intelligence agencies. James also serves as the primary business development lead for these market segments. He can be reached at [email protected]. 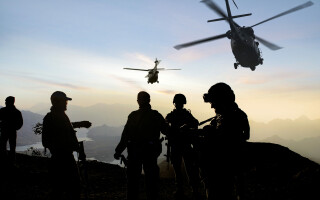