Higher-density RF is on your radar with VITA 67.3 standard

These days, multifunction radars handle functions from surveillance to jamming to fire control, and can track multiple targets in both short- and long-range threats. That means one thing for your active electronically scanned array (AESA) radar design--you need a lot more signal processing power.

As digital processing speeds increase, data converters are implemented closer to the antenna, driving size and weight reductions. Open computing platforms based on the VPX (ANSI/VITA 46) standard are supporting these trends in increasing speed and density. Within this architecture, the coaxial interconnect standard for VPX--VITA 67--will leapfrog RF density and bandwidth, making it an excellent solution to shrink the packaging of radar interfaces.

An inside look at a higher density RF interface

Doing more in less space is one of the driving principles behind recent VITA 67 developments.

The VITA 67.1 and 67.2 standards enable multicoaxial RF backplane connections using sub-miniature SMPM series blind-mate connectors. The VITA 67 RF module design positions the SMPM contact interface within robust stainless steel or aluminum modules that hold four (VITA 67.1) contacts or eight (VITA 67.2) contacts. On the plug-in card side, the spring-mounted contacts take up axial tolerances between boards within the chassis architecture. This assures that the RF contacts bottom when the VPX plug-in module is installed and maintains excellent RF performance under many rugged environments.

But as demands on RF systems have evolved, so has VITA 67. Upgrades in missile defense/control, surveillance, signal processing, and communication systems require even more speed and more channels in less space.

Moving ahead with VITA 67.3 standard

Recently, VITA 67.3 was approved as an ANSI standard. This standard reverses the interface of the SMPM contacts, putting the float on the backplane contacts and leaving the contacts at the plug-in card stationary. Direct termination (e.g., edge launch) to the plug-in carrier board is now possible. This frees up space within the plug-in computing module by eliminating cables—or cables can be optionally used, as the standard does not define the termination, just the interface. 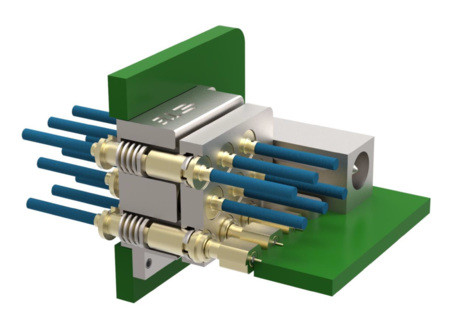 VITA 67.3 also enables the designer to define the coaxial contact positions within the machined module to suit the application. Plus, the standard offers taller connector module profiles that support one-inch slot pitches within a VPX chassis.

The advantages of VITA 67.3 to the designer are: 1) the ability to free up space within the plug-in module by eliminating cabling, and 2) more options to increase the contact count within a module along the edge of the board.

Solutions are now being introduced that will use even smaller contacts to increase contact density and support higher frequencies. The VITA 67.3 standard framework makes it possible to add new contact interfaces. Within a half-size VITA 67.3D module, 12 NanoRF contacts can support 70 GHz, compared to current 4 RF VITA 67.1 contacts at 26.5 GHz.

How has increased density been achieved? The NanoRF design leverages the alignment features of VITA 66 (optical modules). A floating insert on the backplane pre-aligns the RF contact array before the contacts start to engage. This precision alignment is critical in blind mate plug-in architecture, which requires high reliability under rugged conditions. Precise alignment is especially important as contact sizes get down to 0.010” pin diameters.

VITA 66.5 is being drafted to achieve further density with hybrid RF/optical modules by combining the RF and optical links within the same connector module. The floating insert can house both an array of RF contacts and MT ferrules, adapting up to 10 NanoRF contacts and an MT within a half module space.

Just as impressive: The VPX roadmap will support 25 Gb/s data rates (from today’s 10 Gb/s) for digital channels with TE’s new MULTIGIG RT 3 connector, providing a significant increase in bandwidth. And the density of optical interconnect modules is increasing, both in fiber count and data rates, enabling as many as 48 optical fibers within a half module. This evolution in connectivity is an engaging solution for designers looking to increase speed, density, and robustness in the radar and electronic warfare platforms of the future.