UAVs and the kill web

UAVs (unmanned aerial vehicles) are already part of the kill web for the U.S. military, forming teams with manned aircraft, dropping bombs, and providing persistent surveillance across the globe and soon will be equipped with lasers to provide even more lethality. UAVs have reshaped warfare in modern times, but you may be surprised to learn that they have actually been around since 1849.

The Austrians filled hot-air balloon gondolas with about 33 pounds of explosives and launched about 200 of them from land bases and ships offshore in the siege of Venice. The winds carried them over the city, a 30-minute time fuse released the gondolas, and they exploded when they hit the ground. In 1916, there was the radio-controlled Ruston Proctor aerial target drone, used to ram and ignite hydrogen-filled Zeppelins. Then, there was the 1917 British Hewitt-Sperry automatic airplane. That design was perfected in the U.S. as the Kettering Bug (the flying torpedo). Later on, Reginald Denny started the Radioplane Company in Southern California, and built a factory where Norma Jeane Dougherty came to work. In the 1940s, they made thousands of radio-controlled target drones that the Army used for anti-aircraft gunnery practice. Norma Jeane got tired of building drones, went into show biz, and changed her name to Marilyn Monroe.

In WWII (1944), the Army Air Corps and U.S. Navy initiated Operation Aphrodite and Operation Anvil, respectively. They stripped-down some old B-17 and B-24 bombers, that were unfit for manned bombing missions, and loaded them with 10 tons of Torpex explosives. A human pilot would accomplish take-off and fly them as high as 2,000 feet. Then the pilot would switch over to remote-controlled flight, pull the arming pin on the explosives, and bail-out. A nearby aircraft would fly the explosive-laden planes into Germany by radio control, and crash them into submarine bases or rocket-launching sites. Navy Lieutenant Joseph Kennedy, Jr., JFK’s older brother, died in one of those planes. Just before bailing-out, he pulled the arming pin and his plane exploded. All these early platforms were single-use aircraft, so they could be viewed as the first cruise missiles instead of UAVs. It depends on how you look at it.

Today, UAVs can be autonomous aerial vehicles (AAV), remotely piloted vehicles (RPV), or a mixture of both. If a drone loses its communications link to its controller-pilot, it can continue on a pre-established mission or return to base without human intervention. Back in 2016, an MQ-9 reaper stayed airborne over California for 37.5 hours. According to web information, the large onboard fuel tanks can provide as much as 42 hours of flight time. In July 2018, an MQ-9B SkyGuardian version of the Reaper flew non-stop from Grand Forks, North Dakota to RAF Fairford airfield in Gloucestershire, England (3,760 miles) in 24 hours and 2 minutes. With 40 hours of flight time, it could have flown much deeper into Europe, depending on the winds.

The first real UAV, as we know them today, was the RQ-1 Predator (R for reconnaissance and Q for unmanned aircraft system). First versions could stay airborne for 24 hours or 775 miles, whichever came first. Predators were used for reconnaissance missions in the Balkans and later in the Middle East. In September 2000, an RQ-1 spotted Usama Bin Laden at Tarnac Farms in Afghanistan, but at that time, the Predator was not armed. He got away.

After this missed opportunity, General John Jumper ordered the Air Force’s super-secret Big Safari operation and the CIA to hang two Hellfire missiles under the Predator’s wings. They created the MQ-1 Predator (M for multi-mission, and Q for unmanned aircraft system). On 7 October 2001, a Predator fired its first Hellfire missile in anger at a parked truck, in a compound where Taliban founder Mullah Mohammad Omar was located, in Kandahar, Afghanistan. It destroyed the truck and killed several of his men, but Omar got away (he died of tuberculosis in 2013). The UAV that fired that missile, tail number 3034, now hangs in the Smithsonian. In time, MQ-1 pilots became very proficient at aiming Hellfire missiles at terrorists, as history shows. Since 1995, 360 Predator drones were built. On 9 March 2018, all remaining Predators were retired and replaced by the MQ-9 Reaper drones. Over 200 Reapers have been built since 2007. Go read Richard Whittle’s book, “Predator”, for a comprehensive history of UAVs.

Now, let’s take a look at the market forecast for drones. The openly available information is confusing, muddled, and deficient in many ways. The U.S. military may buy 3,000 UAVs, but only 50 of them are real aircraft. The other 2,950 are mini-UAVs or micro-UAVs (little model airplanes or quadcopters). So, we have to sort-out the small stuff. UAVs are divided into seven categories in this report, by their prices, so that’s not much help. It says that U.S. manufacturers built 1,179 UAVs in 2017 (worth $1.8 billion), and will build 2,530 in 2026 (worth $4.4 billion). This looks like the larger UAVs, based on the dollars. U.S. makers built 2,530 mini-UAVs in 2017 (worth $189 million), and will build 4,439 in 2027 (worth $363 million). This looks like the small stuff, based on the dollars. There are some older reports out there but they all have trouble counting things too.

Maybe it’s better to look at the Fiscal Year 2019 U.S. Department of Defense (DoD) budget request (https://dronecenter.bard.edu/files/2018/04/CSD-Drone-Spending-FY19-Web-1.pdf). It shows an increase in procurement for drones to $3.71 Billion so this source gives us better clarity, at least from a U.S. perspective. The DoD plans to buy 3,250 UAVs in 2019. Part of this budget ($279 million) is slated to buy 3,070 small drones like RQ-11 Ravens and RQ-20 Pumas. The Air Force plans to buy 29 new Reaper drones in 2019 ($1.43 billion). The Army gets 10 new MQ-1C Gray Eagles (a version of the Predator). The Navy gets four MQ-4 Triton maritime surveillance UAVs (a version of the Global Hawk). And they ordered four new MQ-25 Stingray aerial tanker drones for their aircraft carriers in August.

There are many more UAV line-items in this budget, so look at the table in the link. Like I said before, you’ll see about 50 big drones in the budget, and about 3,200 small ones. However, these numbers don’t count big drones being bought by our allies. In June, Australia bought four new MQ-4C Triton maritime surveillance drones for their Navy. In July, Netherlands ordered four MQ-9 Reapers.

A few more things worth noting here: Pakistan bought 48 armed Wing Loong drones from China in early October, probably to counter India in the Kashmir region. Back in June, Germany procured some armed Israeli Heron-TP drones too. There are just too many of these small foreign deals to track-down and include in this report.

What else is going on with UAVs? In 2005, six EU countries agreed to finance and build a next generation UCAV (Unmanned Combat Air Vehicle): France, Greece, Italy, Spain, Sweden, and Switzerland. The “nEUROn" made its first flight in 2014. Considering the information about this drone, the artistic handling of the name (Neuron) is more impressive than the actual aircraft. No indication of how many of these drones will be built in the future.

In yet another European Union project, France, Germany, Italy, and Spain agreed to work together on a new medium-altitude long-endurance remotely piloted aircraft system (MALE RPAS). A mock-up of the aircraft was unveiled at the Berlin Air Show in early 2018. In this instance, the aircraft looks more creative than its name. In 2013, BAE (UK) flew their Taranis UCAS (unmanned combat air system) for the first time. Additionally, BAE Systems is working on a new UAV called Magma. No predictions of future volumes for these UAVs either.

Since 2013, Boeing has been installing "autonomy kits" on some old F-16 fighter jets, and the Air Force is using them as target drones for fighter pilot gunnery practice. Today, they are enhancing those autonomy kits to turn older fighter jets into UCAS platforms (unmanned combat air systems). One F-35 could control 4 or 5 of these unmanned fighter planes on combat missions. With advanced AI algorithms onboard, these modified old fighters can fly themselves, find targets, and destroy those targets autonomously. Adding more confusion to our perspective, these jets blur the distinction between UAVs and fighter planes.

Also, Kratos Defense is developing the XQ-58A Valkyrie, an unmanned fighter plane for the Air Force. It will be a “wing man” platform controlled by F-35s in combat. Supposedly, they can carryout bombing missions or chase and kill enemy fighter jets when the systems and software are debugged. Then, there’s the Kratos UTAP-22, a smaller swarm-drone that can also drop bombs and chase enemy fighters. It’s too early for production numbers on either of these platforms.

Now let’s review some history and technological progress, and tie two things together: UAVs and laser weapons. In August, the United Nations (UN) Committee on Certain Conventional Weapons (CCW) met in Geneva, to hammer-out a treaty to ban fully-autonomous weapons (killer robots and killer drones). Five countries blocked the agenda of that meeting: the U.S., Russia, South Korea, Israel, and Australia. This committee could not even come to an agreement on the definition of an autonomous weapon.

In 1972, the UN General Assembly voted to ban the use of incendiary weapons against soldiers in battle. Think napalm. But, this ban also covers directed-energy weapons since lasers are incendiary devices. In 1977, Article 35 was passed by the Geneva Convention. It prohibits the use of weapons that cause “superfluous injury or unnecessary suffering.” Think poison gases, deadly biological weapons, and probably laser weapons too. In 1998, the UN passed the “Protocol on Blinding Laser Weapons”. It says military forces cannot use lasers to permanently blind enemy soldiers on the battlefield. In spite of these new Laws of armed conflict, progress is being made on laser weapons. You can’t permanently blind enemy soldiers, you can’t expose them to severe burns, and you can't inflict superfluous injury or unnecessary suffering. But, the laws don’t prohibit vaporizing an enemy soldier in an instant. According to the latest research, it takes about 2 Megawatts of laser energy for a few milliseconds, to completely disassemble a human body into its basic atomic components.

In 1911, the Institute of International Law in Madrid proposed banning the use of aircraft in war, with the exception of reconnaissance missions. Many countries signed the proposal, except for the major countries that had airplanes just before WWI. When portable 2-Megawatt lasers are feasible, you can bet that laser weapons will replace Hellfire missiles on UAVs.

So, there’s your cursory overview of the UAV markets. The U.S.-made drones are already integrated into the kill web, and can share targeting data with bombers, fighter planes, warships, and ground troops. They can drop bombs and fire missiles at enemy targets already. Replacing bombs and missiles with laser weapons is the next logical step, and will significantly speed-up the “fire and finish” segments of the Kill Web.

Even though we’ve reviewed the market research reports on the future purchases of numerous military platforms in previous articles, you may still feel bereft and puzzled. Maybe looking at the C4ISR [Command, Control, Communications, Computer, Intelligence, Surveillance, and Reconnaissance] systems market will assuage your anguish and beguile your befuddlement. That’s what we’ll do in our next episode, so brace yourself for a blast wave of assuagement closely followed by the shrapnel of beguilement. 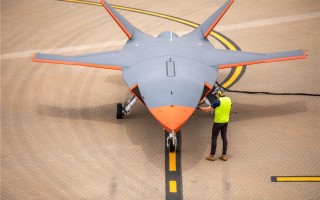