SANTA CLARA, Calif. Cumulative spending by the U.S. Department of Defense (DoD) on military combat vehicles will reach $56.25 billion by 2024, according to a new study by Frost & Sullivan, "US Military Combat Vehicle Market, Forecast to 2024."

Study analysts found that the U.S. Army is investing heavily on enhancing its aging combat vehicle (CV) fleet, while at the same time spending on development of next-generation vehicles that will operate unmanned, collect intelligence, and follow an optionally manned vehicle leader. While the inclusion of robotics and autonomous systems in CVs will enhance combat effectiveness, the convergence and integration of various sensors and weapons systems are set to provide lucrative application opportunities.

From a market-competition standpoint, the top five participants in the market accounted for 80.8% of the total value of contracts awarded during 2018; such companies as BAE Systems, General Dynamics, and Oshkosh Defense  compete on cost, performance, schedule, support, technology, reliability, contractor relationships, and customer relationships.

“To contend in a highly established and consolidated market, OEMs need to start restructuring their platforms with a focus on open architecture,” stated John Hernandez, Senior Industry Analyst, Defense at Frost & Sullivan. “Benchmarking winning modular designs, improving their capabilities by building affiliations that complement their capabilities with a variety of options, and ensuring user requirements are met will be key to future success.”

For additional information on this study, visit the Frost & Sullivan website. 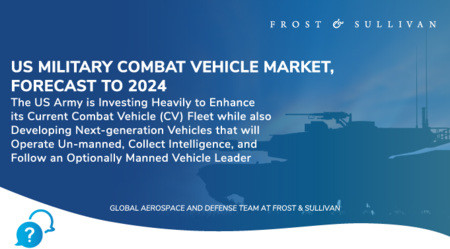