LONDON. The global market for supersonic and hypersonic missile systems market will total $11.1 billion in 2019, according to a report from Visiongain, "Supersonic and Hypersonic Missiles Market Report 2019-2029."

According to the analysts, the supersonic and hypersonic missiles portion of the defense sector will flourish in the next few years because of increased spending by governments on modernizing their armed forces -- owing to successful test launch and deployment of hypersonic missiles by countries such as Russia and China -- which has led to other countries' efforts to modernize missile systems tailored for the modern armed forces as various stakeholders scramble to meet demands for enhanced air defense.

For additional information on this market study please visit the Visiongain website. 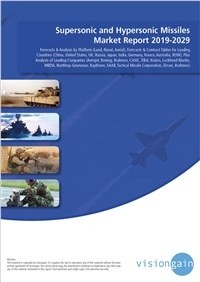