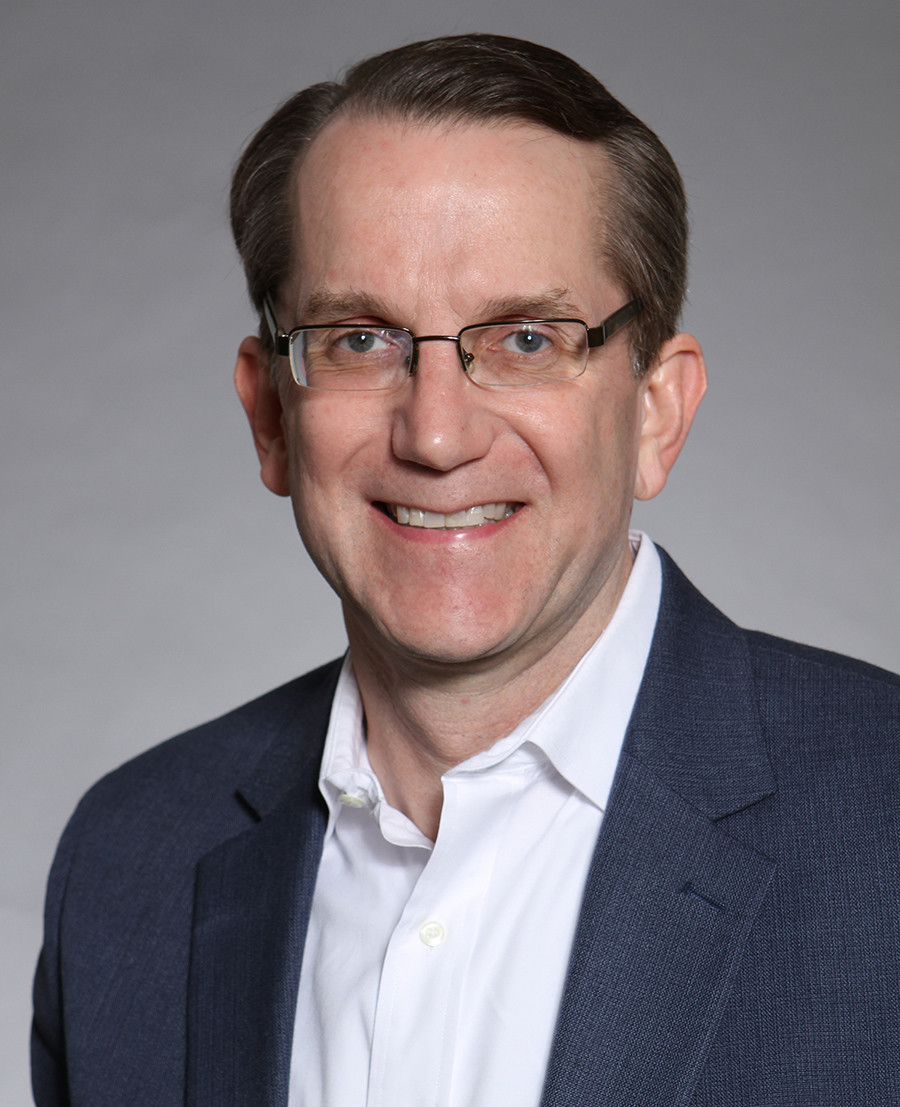 A zero-trust security posture assumes every user and device is untrusted, even if it is located within the protected perimeter of the local network. The concepts of such perimeterless security have been around for more than a decade, including the “black core” in the architectural vision of the U.S. Department of Defense (DoD) Global Information Grid. Integrators of embedded systems who must have the highest levels of security for such applications as electronic warfare (EW) warning systems can layer higher-level security – such as advanced analytics – atop the embedded computer’s real-time operating system (RTOS) to complete the zero-trust architecture.

In the commercial world, Google was one of the first companies to implement such a perimeterless security with their BeyondCorp security model starting in 2009. Yet, until recently, the military has been slow to adopt and implement zero-trust architectures.

All that changed in early 2021. In February, the Defense Information Systems Agency (DISA) published the Department of Defense (DoD) Zero Trust Reference Architecture¹. Two months later, the DoD Chief Information Security Officer, David McKeown, described plans to create a zero-trust portfolio management office that would provide critical centralization and orchestration for the department’s move toward the advanced cybersecurity architecture².  Then in May 2021, Executive Order 140281 on improving the nation’s cybersecurity₃ directed each federal agency, including each military department, to develop a plan to implement zero-trust architecture.

The motivation for implementing a zero-trust architecture stems from the increase in network breaches for both public and private enterprises. Traditional cybersecurity architectures attempt to establish and defend a network perimeter around a trusted computing environment using multiple layers of loosely connected security technologies. Contemporary threat actors, ranging from cybercriminals to state-funded hackers, have demonstrated the ability to breach the network perimeter defenses. At that point, they are free to move laterally over the network to other systems and gain largely unfettered access to systems and the data and algorithms contained within.

Beyond being susceptible to external threat actors, perimeter defenses do not protect well against internal threats (Figure 1). Malicious insiders can carry out fraud, theft of data and intellectual property (IP), and sabotage, which can include modifying or disabling functions, installing malware, and creating back doors. 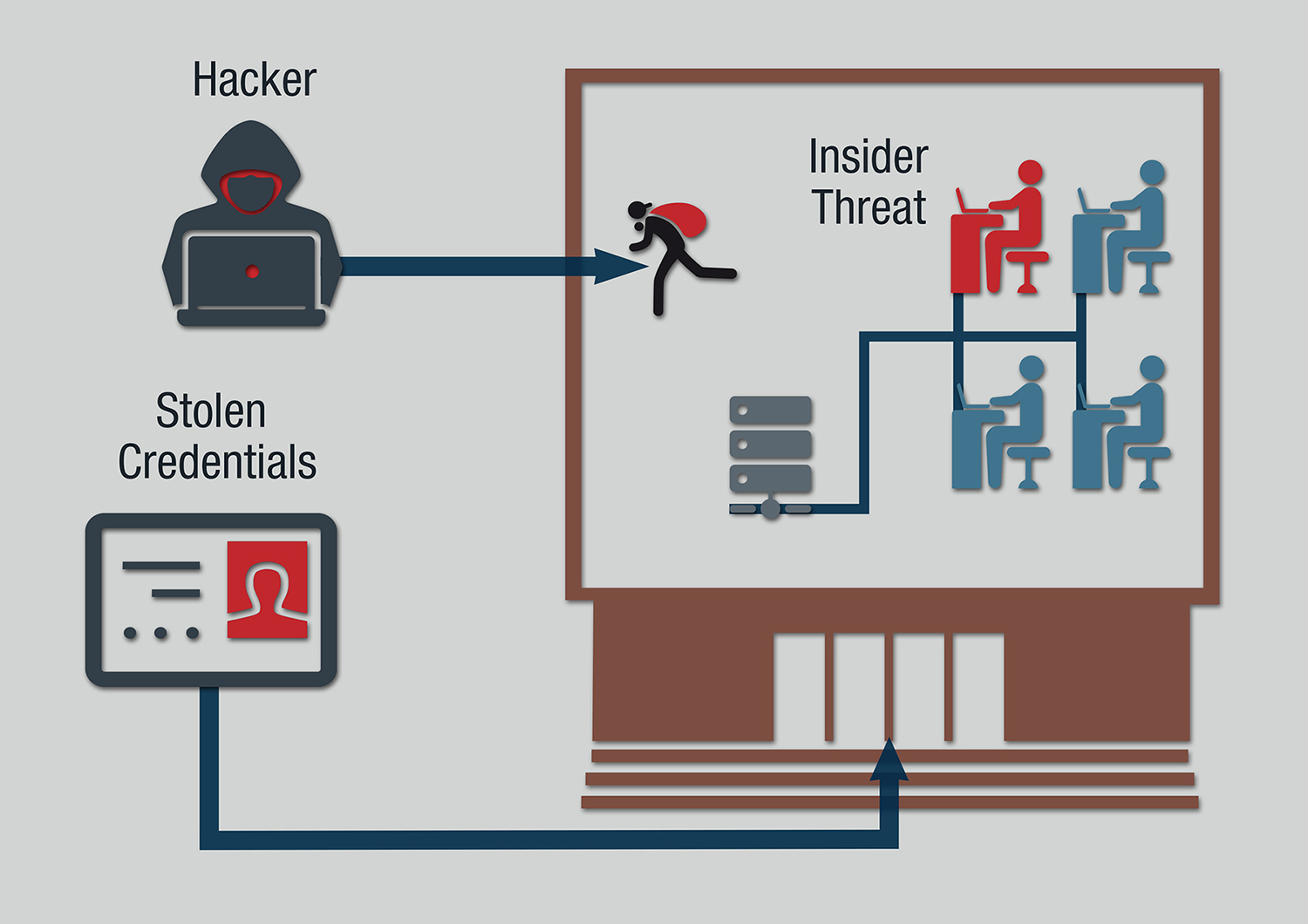 [Figure 1 | A perimeter defense does not protect well against stolen credentials or insider threats and is also vulnerable to sophisticated hackers.]

A zero-trust approach shifts the emphasis from the perimeter of a network to the discrete applications and services within a network, building more specific access controls to those specific resources. Those access controls match the identity of users and devices to authorizations associated with those users and devices to ensure access is granted appropriately and securely⁴.

Most modern embedded systems are connected to a network, making them vulnerable to attack. This increasingly applies to military embedded systems, such as connecting to a cloud for data analysis or downloading new waveforms while on a mission. In addition to network-based attacks, there are also attacks during maintenance and insider attacks, including supply-chain attacks. Yet many embedded systems have only loose security postures, primarily because of the perceived cost to implement stricter security. When security is implemented, it is almost always perimeter-based security at the edge of the embedded system. That can be as simple as a user ID/password combination that can grant broad admin-level privileges or something slightly more sophisticated like a firewall. Embedded systems can benefit from a zero-trust architecture, but they have two significant differences from enterprise environments that impact the security solution.

The first big difference is that embedded systems have a stable set of subjects (applications), devices (embedded processors), and communication paths. Adding new applications or devices is rare, and even upgrading applications or replacing failed devices happens infrequently. The result is that the system integrator can lock down the system configuration – not just the hardware and the operating system (OS), but also the middleware and applications. Scheduling execution of trusted applications and specifying approved communications paths both can be defined statically in a configuration file used at boot time. Dynamic integrity testing is still advised to detect if any software component gets altered.

The second significant difference is that many embedded systems operate autonomously or with a minimal number of users and roles. This results in two broad implications for secure operation. First, minimal administrative functionality is needed to support the system. Second, additional assurance measures are inherently required to ensure the highly robust autonomous execution of the security management functions⁵.

These differences in environment and use cases enable embedded systems to tailor the security solution more easily than in an enterprise environment.

A zero-trust architecture moves away from the default policy of “trust but verify” for entities inside a perimeter defense to a policy of “never trust, always verify” for all entities. Every user, device, application, and data flow is verified, whether inside or outside a traditional network boundary. The other core concept of zero trust is the principle of “least privileged” to be applied for every access decision. Common to many security approaches, the principle of least privilege calls for a subject to be given only the minimum access level required to perform a given task.

1.         Never trust – always verify: Treat every user, device, application, and data flow as untrusted and potentially compromised, whether inside or outside a traditional network boundary. Authenticate and authorize each one only to the least privilege required to complete the task.

2.         Assume breach: Consciously operate and defend resources with the assumption that an adversary already has breached the perimeter and is present in the network. Deny by default, and scrutinize every request and requestor.

3.         Verify each action explicitly: Use multiple attributes (dynamic and static) to derive confidence levels for contextual access decisions to resources.

A well-accepted foundation for military embedded security is the use of partitioning to run applications in separate, isolated partitions. Apart from microcontrollers and digital signal processors, most CPU chips used in embedded systems include a memory management unit (MMU) that can be used for hardware-enforced partitioning of memory for different applications. Although that MMU can be controlled by a general-purpose OS or an industrial real-time operating system (RTOS), the most secure systems use a separation kernel. A separation kernel is a specific type of microkernel where the essential functions running in privileged kernel mode are only the most critical security functions.

A separation kernel is a minimized OS kernel whose only function is to enforce four basic security policies: data isolation, fault isolation, control of information flow, and resource sanitization⁷.  All other OS services are moved to user space so that the code size and attack surface of kernel-mode code is the absolute minimum (Figure 2). One way to think of this is to apply the principle of least privilege to the OS itself. Software components with the largest attack surfaces and the most vulnerabilities, such as the networking stack, file system, and even virtualization, can execute sufficiently in user mode, so the security policy should not allow them to execute in privileged kernel mode. 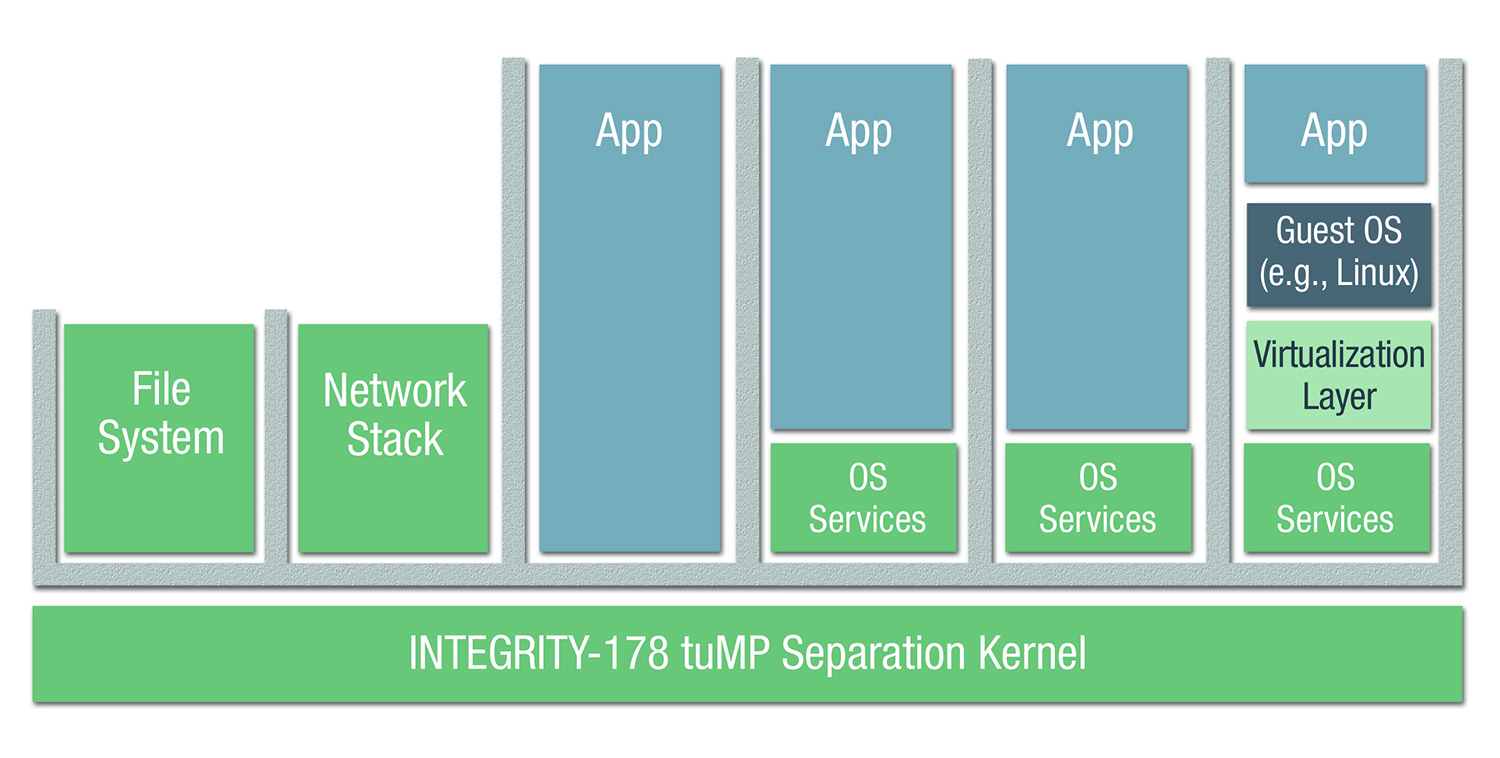 [Figure 2 | With a separation kernel, the OS services, middleware, and applications run in isolated partitions and only explicitly permitted, preconfigured communications occur between them.]

A less secure alternative to a separation kernel is a hypervisor, which adds virtualization to the kernel code to increase virtualization performance at the expense of a larger attack surface. That more extensive code base is much harder to secure, let alone prove it is secure. 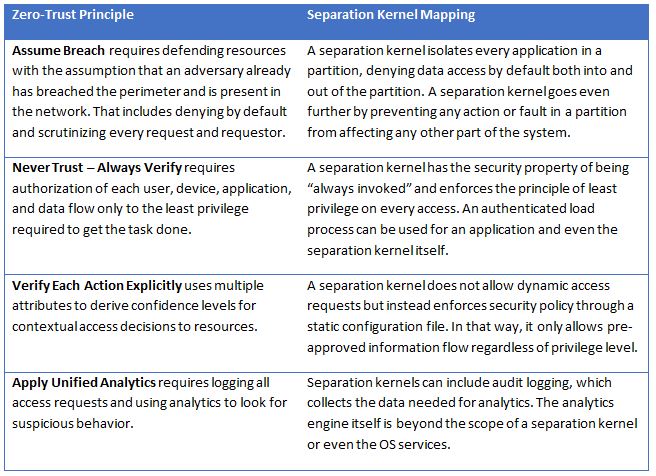 The National Institutes of Standards and Technology (NIST) Special Publication 800-207 “Zero Trust Architecture”⁸ describes a general architecture that uses a policy engine, a policy administrator, and a policy enforcement point (PEP) as the core of zero trust (Figure 3). The policy engine makes the decision to grant, deny, or revoke access to the resource. The policy administrator executes the decision by establishing or shutting down the communication path, generating any session-specific authentication and authentication token or credential used by a client to access an enterprise resource. The PEP is in the data path of resource access and is responsible for enabling, monitoring, and terminating connections between a subject and an enterprise resource. In some implementations, the PEP is divided into a client-side agent and a resource-side gateway. 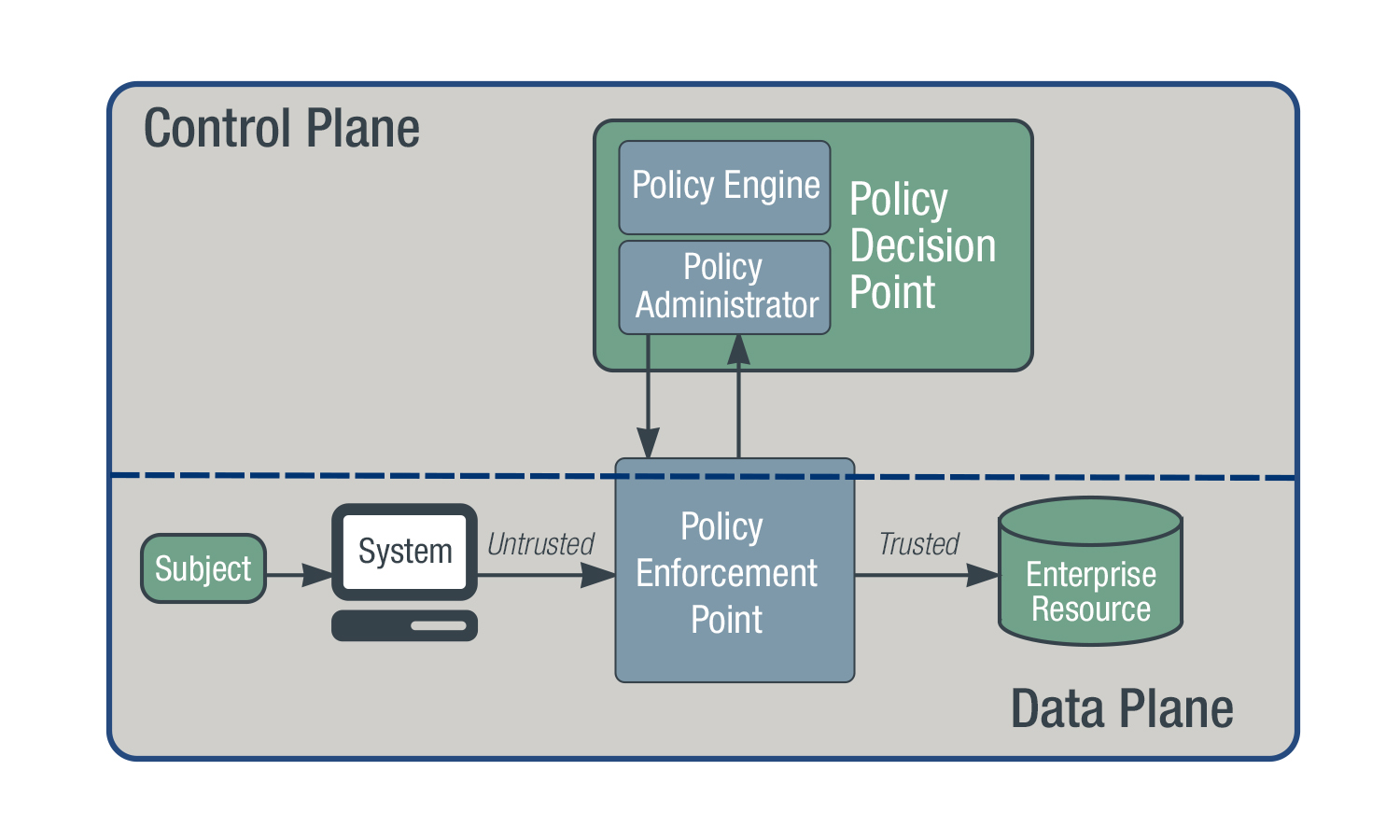 In practice, zero-trust architectures often segment individual resources or groups of resources on a unique network segment protected by a security gateway that acts as the PEP. Segmenting network traffic reduces the attack surface and makes it harder for the adversary to move laterally through the network.

Micro-segmentation is an essential part of moving from a network-centric approach to data-centric security. It works at a more granular level to protect DAAS by creating policies that limit network and application flows between workloads to those that are explicitly permitted. It does this by segmenting users, applications, workloads, and devices based on logical, not physical, attributes¹. Implementing microsegmentation early in the zero-trust process follows the NSA’s advice⁶ to first focus on protecting critical DAAS before securing all paths to access them. The smaller virtual network segments also present a reduced attack surface.

Applying this to embedded systems, a separation kernel directly supports microsegmentation. Microsegmentation uses lists of explicitly permitted network and application flows between workloads, sometimes called “access lists” or “allow lists.” If a connection is not explicitly stated, it is denied by default. A separation kernel implements such an access list in a static configuration file that is loaded when the kernel is booted. No application or other software running in user space can be given a level of privilege that can change the configuration file or circumvent the access list. 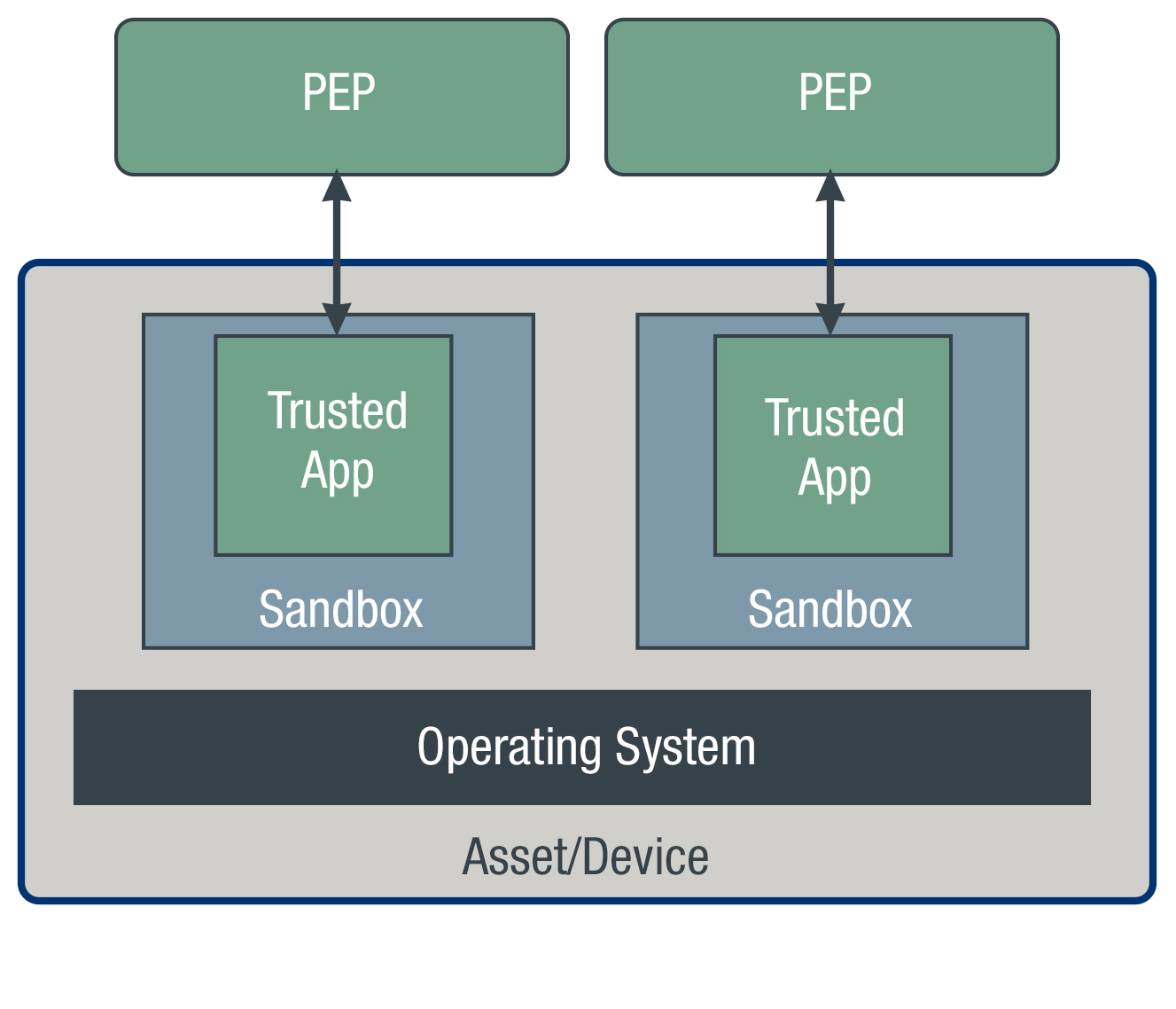 In 2008, the INTEGRITY-178 RTOS became the first and only operating system to be certified against the NSA-defined Separation Kernel Protection Profile (SKPP)10. The certification against the SKPP was to both NSA “High Robustness” and Common Criteria EAL 6+, and it included a formal proof of correctness for the separation kernel11. That certification also included penetration testing and covert channel analysis by the NSA. Green Hills Software’s latest RTOS version for multicore processors, INTEGRITY-178 tuMP, still meets the SKPP’s rigorous set of functional and assurance security requirements for those customers needing it.

System integrators can layer higher-level security, such as advanced analytics, on top of the RTOS to complete the zero-trust architecture.

Richard Jaenicke is director of marketing for safety and security-critical products at Green Hills Software. Prior to Green Hills, he served as director of strategic marketing and alliances at Mercury Systems, and held marketing and technology positions at XCube, EMC, and AMD. Rich earned an MS in computer systems engineering from Rensselaer Polytechnic Institute and a BA in computer science from Dartmouth College. Readers may email him at [email protected].