TORONTO. The global amphibious landing craft market is expected to grow at a CAGR of more than 4% during 2019-2023, according to a market research report by Technavio, "Global Amphibious Landing Craft Market 2019-2023."

One of the major forces driving innovation in this market, according to the study authors, will be the integration of directed-energy weapons (DEWs) into the amphibious landing craft. DEWs such as hypersonic missiles and hypersonic tail guns have brought about a new era of technological advances -- including efforts to use high-endurance, low-weight materials -- that can be used in increasingly sophisticated amphibious landing craft.

Other factors resulting in an increase in this market is the rising troop deployment by countries including the U.S., Russia, China, and India across their national borders and borders of their respective allies, which has boosted the need for specific variants of amphibious landing craft; and the occurrence of modern conflict scenarios near coastal regions, which has driven prominent nations to launch modernization initiatives for their landing-craft fleet.

For additional information on this market study, visit the Technavio website. 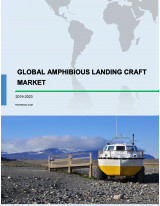