Catch some rays - but don-t lose your memory

When planning for application and system security, military embedded systems designers have to think out of the box about what will go in the box. 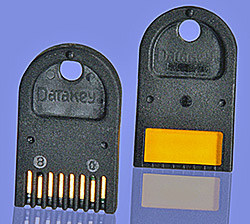 When planning for application and system security, military embedded systems designers have to think “out of the box” about what will go in the box. Hence, with many defense systems subject to Nuclear, Biological, and Chemical (NBC) requirements, even if humans are put at risk, it’s often imperative that the equipment survive intact. And Datakey Electronics’ GammaSafe portable, reprogrammable, nonvolatile memory token enables specialized military or medical technology developers to fit devices with limit-use and anti-counterfeit capabilities to either limited-use disposable or single-use attachments exposed to gamma radiation.

Accordingly, gamma radiation used in sterilizing medical devices, for example, often causes device failure and data loss in conventional technologies such as solid-state memory wares; however, the GammaSafe memory token can withstand up to 45 kGy (4.5 Mrad) gamma radiation – with all data remaining intact. The SGT4Kb GammaSafe flavor comprises 4 Kb memory accessed utilizing an SPI bus, and its functionality resembles an SPI EEPROM. And to make things more convenient, the memory token features a triad of receptacle choices: one board-mount and two panel-mount variants.