It's a hassle for soldiers to have to switch gears (literally), going from operating a computer one minute to suiting up to engage in combat the next. 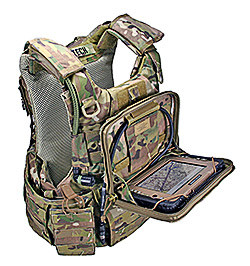 It’s a hassle for soldiers to have to switch gears (literally), going from operating a computer one minute to suiting up to engage in combat the next. Such packing and repacking batteries and computers takes time and adds weight to the soldier’s ensemble, and Black Diamond Advanced Technology’s wearable, MIL-STD-810-G and MIL-STD-461F compliant Modular Tactical System (MTS) stops these slowdowns. Operationally proven in Operation Enduring Freedom by Special Ops groups, MTS is vended presently as a COTS ware (or is that “wear”?).

Specifically, the MTS vest configuration starts with a Tactical Mission Controller (TMC) comprising these notables: a power manager, an Intel Atom 1.6 GHz-based processing platform with 2 GB RAM and 128 GB removable SSD, and a peripheral controller. Software includes an intuitive interface that presents C2/SA info adeptly on a single display. TMC rides on back of the plate carrier, and an interchangeable cummerbund houses the computer cables and also mounts onto a plate carrier. A tactical hub for rangefinder and other mission peripheral interfacing is additionally cummerbund routed. Meanwhile, a 6.5" Night Vision Goggle (NVG)-compatible, sunlight-readable Universal Tactical Display (UTD) is housed in a flip-down front pocket. And those batteries already carried by the soldier power-up the system, eliminating any need for redundant batteries. MTS weighs a mere 1.8 to 3.5 lbs, and vehicle and bag configurations are also available.