FPGA offers a triad of wares, all rolled onto a single chip

How much better would it be to combine a triad of components onto a single chip and save integration time and tool cost? 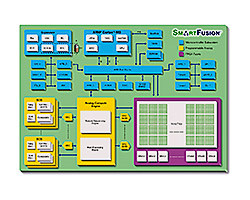 How much better would it be to combine a triad of components onto a single chip and save integration time and tool cost? Actel’s SmartFusion “intelligent mixed-signal FPGA” does just that, by combining a full-featured FPGA, a microcontroller subsystem, and programmable analog onto a single “intelligent” chip. The attention grabber is the “intelligent” aspect. This is provided by the microcontroller subsystem, based on a 100 MHz ARM Cortex M3 processor and additionally sporting 10/100 Ethernet MAC with RMII interface; 16 Gbps throughput communications matrix (multilayer AHB); an External Memory Controller (EMC); a pair of each of 32-bit timers, UART, I2C, and SPI; and an eight-channel DMA controller.

And as if that weren’t enough … the full-featured FPGA utilizes Actel’s ProASIC flash-based FPGA architecture based upon 130 nm CMOS featuring densities of 60K to 500K for the system gates, plus 204 I/Os and 350 MHz performance. That much capability frees up board space and lowers the system’s overall power consumption. Then there’s the programmable analog, powered by the Analog Compute Engine (ACE). ACE offloads analog initialization from the ARM by executing sample computation and sequencing. ACE comprises a trio of up to 600 Ksps sampling ADCs (up to three 12-bit); as many as three 12-bit first order sigma delta DACs; multiple integrated voltage, current, and temperature monitors; and up to ten high-speed comparators at 50 ns. And IP security is no problem, thanks to Actel’s FlashLock technology, standard aboard SmartFusion FPGAs.

MQ-4C Triton sense and avoid capabilities for to undergo advancements