TTTech experts have developed a lead-free version of the company’s high-speed communication TTP Controller for data buses with speeds of as fast as 25 Mbitps. 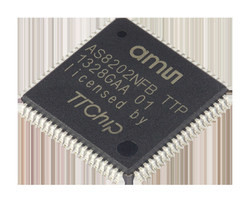 TTTech experts have developed a lead-free version of the company’s high-speed communication TTP Controller for data buses with speeds of as fast as 25 Mbitps. This next ASIC version has performed intensive physical tests such as liquid-to-liquid. For these tests, the TTP Controller was placed into liquid thermal shock chambers, consisting of separately controlled hot and cold baths, resulting in immediate product temperature changes. All of the company’s tested TTP Controllers remained fully operational during the test.

The integrated device implements features and functions described in the SAE AS6003 standard. TTTech officials say the device is International Traffic in Arms Regulations (ITAR) free and meets DO-178 B DAL A and DO-254 DAL A. The TTP Controller was designed using the DO-254-compliant C2NF chip IP model. It has been used and certified in various modular and distributed control systems, including the Boeing 787 Dreamliner and the Airbus A380. It has also been applied in the engine control of the Lockheed Martin F-16 and the Aermacchi M-346. The next generation of the TTP Controller completed testing this spring.