Attention, military designers: It just might be time to scrap your plans to swap in a display and bussed ATR when that critical system goes kerplunk. 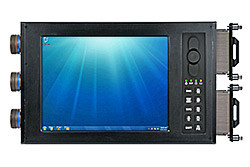 Then there’s the “rugged” – so much so that the company describes Armor as “boot kickable.” (Anyone want to try it?) Aside from resisting impact (apparently), the computer is also watertight and the display comes with optical transmission greater than 97 percent, thanks to the slathered-on Direct Dry Film rendering avionics-grade viewability. Sunlight readable and night vision- and blackout ops-savvy, Armor is easy to use with its backlit keys and eight-wire touch screen, operable even when gloves are worn.