Fifth-generation wireless technology, or 5G, is poised to emerge in a big way into the defense market. While the buzz surrounding the 5G technology standard has been growing in the general public in recent years, the U.S. Department of Defense (DoD) has been trailing behind commercial entities on adopting 5G due in part to both the slower pace of the DoD’s acquisition process and the hard-to-keep-up-with pace of consumer-technology refresh. However, officials at several defense communications companies agree that it’s just a matter of time before 5G-enabled military solutions are deployed and forever change the way in which the armed forces communicate.

That fact that 5G is a largely commercially developed solution that is now on track for adaptation to military use has enabled defense electronics manufacturers to operate in collaborative environments. This reality will prove to be valuable, as one of the driving factors behind widespread 5G adoption in the military is not the advent of the waveform itself, but the set of network-management standards that will follow.

Multidomain operations, as seen in military programs such as Joint All Domain Command and Control (JADC2), could greatly benefit from the interoperability enabled through 5G use. One way is through 5G technology’s ability to bring disparate solutions together under a unified network management system.

With 5G adoption occurring all around the world, electronic warfare (EW) and spectrum-management applications could also see an evolution following the implementation of 5G architectures. The use of 5G and its incorporation into intelligence, surveillance, and reconnaissance (ISR) systems could indelibly alter how the military gathers actionable intelligence, ranging from how the DoD detects/is detected to further opening vast avenues of data collection.

The transition from Long Term Evolution 4G (4G LTE) to standalone 5G deployment will be gradual, just as it was from the early days of 1G (launched in Japan in 1979, adopted in 1983 in the U.S.) all the way to December 1, 2018, when South Korea became the first country to offer 5G. The process will take even longer to reach the military, with networking standards, current DoD networking architectures, and measured acquisition timelines among the current hurdles bogging down immediate fielding.

The difference between 4G and 5G

Following the introduction and implementation of 4G LTE in consumer and military markets, the unprecedented streaming ability that it offered was regarded as revolutionary. While patchiness in the 4G LTE network did leave users in certain regions unsatisfied, it’s a fact that 5G was already in the planning stages.

“5G, as it actually came to be, was thought of as more than just a generational change in how we communicate through a cellular environment with cell phones. It was actually pretty far-reaching in its genesis,” says John Cowles, director of engineering and technology at Analog Devices (Wilmington, Massachusetts). “It’s more than a comms system, as it enables a system of different systems. What I mean by that is there’s a traditional cellphone system, but 5G also envisions how that might affect IoT [Internet of Things], or even satellite communications. There’s terrestrial communication, there’s people, there’s data, there’s IoT, and then there’s the satellite piece of it.”

Often referred to by industry professionals as the IoT era, 5G dawned amid the understanding that data was being created far more quickly and in volumes greater than what current networks could handle. The vast quantities of unstructured sensor data and the military’s need to make sense of it also produces processing challenges that 5G could likely handle.

The all-encompassing nature of 5G is precisely what makes it such an attractive solution for the military. In areas where past network generations have had to go it alone, 5G and its proponents claim that few systems, waveforms, and data links would go unsupported under a 5G architecture.

“When people talk about 5G, a lot of times they think about the waveform that the cell carriers are bringing to market,” says Craig Miller, president of Viasat Government Systems (Carlsbad, California). “And yes, that is part of a 5G. It is a specific waveform in a way that radios communicate with each other, but the 5G standard and the set of 5G standards are much more than that. And I think that’s one of the things that sets 5G apart from 4G – the extensibility to create a 5G network-management infrastructure that can use additional waveforms.”

It’s notable that a network designed to be as impartial as 5G could actually be pivotal in multidomain operations and the act of bringing disparate systems together for the military. The added benefit of doing so under a simplified network-management system is something that 5G could excel at in comparison to 4G LTE. This would mean true interoperability under 5G for the DoD.

5G and how the military interoperates

“There’s sort of a historical precedent for this,” Miller says. “If you look at how successful interoperability has been achieved in the past, it’s usually by doing it at the ­network level or sometimes the application level. But the internet is an example of doing it at the network level where you have a TCP/IP (internet protocol suite) network and a bunch of different networks that aren’t even always compatible. But you do have the networking standards that allow them to interoperate through either the management or the gateway functions, and 5G can do this. It’s really a way that you can [capture] these disparate networks – those that would have been stovepiped in the past – and then use a 5G network-management architecture to bring them together.”

An important DoD program powered by the modern-day need for cross-domain solutions in the military is JADC2: The robust sensor connectivity that JADC2 was introduced to achieve could be successful under the implementation of a widely compatible 5G-powered network.

“Joint All-Domain Command and Control is key to enabling multi-domain operations,” AT&T/FirstNet’s Spencer says. “JADC2 and global operations, including space-based 5G terrestrial networks, will require the elimination of silos to ensure seamless communications between nodes. For the military, 5G technologies allow for the operation of several potential applications to include C2 [command and control], logistics, maintenance, training, AI [artificial intelligence], augmented and virtual reality, and ISR systems – all of which can benefit from improved data speeds and lower latency.”

Fielding a network as extensible, indiscriminate, and interoperable as 5G, however, will present security concerns, especially in multidomain defense arenas. Officials claim that the security question will influence how 5G networks and 5G network management systems are architected.

“As you bring more users together, there are more paths to give to any individual user. Being able to understand the data and metadata on your network and create a cyberdefense around that is one thing we’ve put a lot of time and energy into in the past decade,” Miller says. “This will be really important on 5G networks, especially in the JADC2 construct as you bring these networks together because you’re going to have to move beyond cyber hygiene and checklist-based and boundary-based cyberdefense and instead move to behavioral analysis and watching how users interact.”

Designing these security and signals-intelligence capabilities into 5G-powered architectures will also be an important part of the role 5G will play in EW theaters. The reason: While the 5G waveform isn’t specifically designed to work in contested environments, its scalability makes it ideal for congested spots.

Officials are excited about the possibility of 5G network-management systems designed to support various protected waveforms and thought to be ideal for EW environments. Pairing a native 5G network with supported waveforms that are built for low probability of detection could enable warfighters to roam between available networks, depending on the mission (Figure 1). 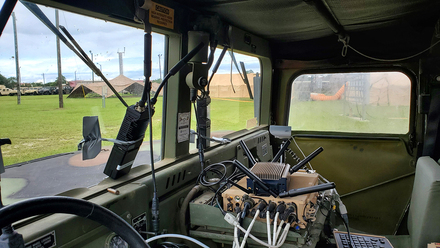 “The part of the 5G spec and waveform that’s operating in the millimeter band – those very high frequencies that tend to not propagate as far – create some capabilities that are a little more interesting in terms of the EW environment,” Miller says. “This is because it’s harder for the adversary to see them, simply because they don’t propagate as far. So, these little bubbles of operation are more difficult for adversaries to reach into. And a hybrid networking case where you have a 5G network with different physical layer waveforms, that also gives you room to play in an EW environment.”

Moreover, 5G could also fare well in EW arenas because it’s designed with the inherent ability to listen only to what it needs to, avoiding disruption from both accidental and purposeful signals that may get in the way. Even so, in the instance that disruption on the electromagnetic spectrum did occur, corresponding 5G-powered technologies could aid in identifying it.

“If an adversary is using 5G technology in the area, then EW systems will need to be able to understand if there’s 5G communication because this technology is not just owned by the U.S.,” Cowles says. “It’s worldwide, so adversaries could very well use 5G to communicate as well. EW systems will need to start being engineered to identify 5G signals and understand what adversaries could potentially be trying to communicate. That’s one side of it, and the other would be the fact that we use 5G technology and we don’t want unwelcome users to be able to disrupt or see what we’re doing. That’s where EW and 5G technology environments will have to coexist.”

Data collection and interpretation are so important to EW and are major pieces of the advantage 5G could provide on the battlefield. With the seemingly insurmountable quantities of data brought in by both military and commercial sensors, 5G-powered computing could better enable processing capabilities.

While edge computing is undoubtedly a start when it comes to military data analysis, there is still far too much of it for humans alone to process. Whether it’s anomalous network behavior, signals on the spectrum, or information from the cloud, automated 5G network-­management systems powered by AI could be pivotal in rendering out actionable details.

“5G technologies could also be incorporated into ISR systems,” Spencer says. “These require increasingly high bandwidth to process, exploit, and disseminate intelligence data from a network of terrestrial and airborne sensors. This could enhance C2 by providing commanders with timely access to key intelligence and actionable information that can improve decision making in split seconds and allow commanders a better understanding of an adversary’s decision cycle.” (Figure 2.) 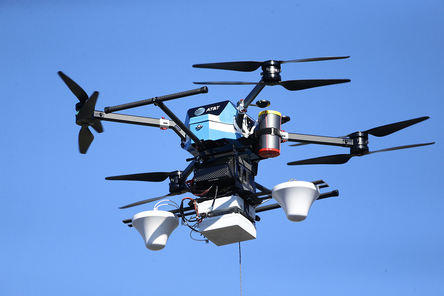 The faster and more efficient transmission of data that 5G could enable would thereby allow AI-powered analysis engines to run more effectively. Because AI and machine learning (ML) algorithms must be trained, enhanced low-latency access to data could result in smarter AI/ML systems.

“What 5G does bring is this somewhat open architecture where you can plug all kinds of different things in that could allow you to plug in different networks at the right level and offer the ability to command and control using the 5G network,” Cowles says. “Historically, with all of the different sensors and systems out there, it’s been very difficult to get actionable, multisensor data from all of the different deployed technologies to give you a cohesive, one-point location for that information. 5G makes that more likely because it can plug into different systems, assuming the necessary security is there.”

The evidence is stacking up: 5G is a network that is not only supportive of high data-throughput systems like that of AI/ML, but it also enables the maximization of such capabilities all the same. Apparent in the excitement surrounding 5G’s implementation is the evidence that players in the network-communications realm appear to be that much closer to tackling the big data problem faced by the military.

“We’ve only seen the tip of the iceberg in terms of what 5G can do,” Cowles says. “5G has such enormous potential and there are so many layers to it we haven’t even seen unlocked yet, and we’ll continue to see that AI will have a bigger role as 5G reaches its full potential.”