Crunching math and computing algorithms forms the basis of many C4ISR applications. T 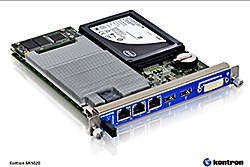 Crunching math and computing algorithms forms the basis of many C4ISR applications. The sensors reel in the data, while the processors slice and dice the bytes into a reconnaissance picture. Adding maximum horsepower in the minimum available space is the norm, and Kontron’s AM5020 Advanced Mezzanine Card (AMC) is one way of leveraging telecom processing in military applications. Based on an Intel dual-core Core i7 CPU, the AMC bolts onto a base card (not unlike the COM Express concept for which Kontron is famous) to form a MicroTCA system. MicroTCA, you might recall, has gained some favor in military applications because it can be ruggedized, leverages COTS modules, and eschews the backplane concept found in VME and VPX LRUs.

With memory controller, PCIe Gen2 I/O, and Intel HD graphics, the processor couples tightly with an Intel QM 57 platform controller hub. This module, with a MicroTCA.1 faceplate and PICMG AMC.1/.2/.3 sub-spec compatibility, makes a complete system. There are 8 PCIe lanes, 4 GbE interfaces, and 6 SATA II channels. The AM5020 can be equipped with an onboard 2.5-inch HDD or up to 32 GB of securely fastened SATA flash. Two USB interfaces, a DVI-D port, two more GbE, and a serial port route to the front panel. And since this is an AMC designed to work with AdvancedTCA, that means IPMI, shelf management, Module Management Controller (MMC), and other high-availability PICMG features are baked in. This is one equation that all adds up.